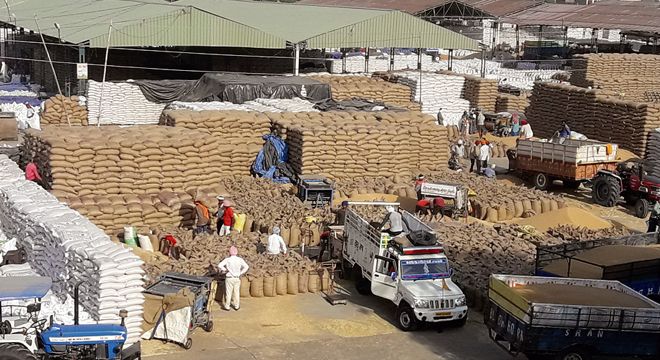 Unlifted stock at the Tarn Taran grain market and farmers wait for their produce to be procured.

Farmers, commission agents and others are facing great difficulty owing to poor arrangements, especially lifting, at the grain markets in the district.

Decrease in the crop yield has already disappointed farmers and negligible lifting of procured stock has further added to their woes.

Charanjit Singh, a farmer of Ghasitpur village under Khadoor Sahib sub-division, said he came with his produce to the grain market on Saturday, but the crop had not been procured yet. He even complained that there were others who came to the market on Sunday and their produce was procured.

Charanjit said due to increase in temperature, his produce declined by five to six quintals per acre, which was less than previous years.

Daler Singh of Jodhpur, Amarjit Singh of Bhojian, Lambardar Amrik Singh of Manochahal Kalan and many others complained that there was no drinking water facility at the markets and toilets, too, were extremely dirty.

They said their yield had been affected and they have suffered four to five quintal loss per acre.

Not only this, farmers said they have to walk more than 300 m out of the Tarn Taran grain market to get drinking water and for washrooms too.

Farmers and commission agents said not even a single bag of procured wheat had been lifted from the market and same was the case at other grain market of Tharu and Kang.

The official disclosed that in Tarn Taran and Tharu and Kang mandis, 29,413 tonne wheat had been procured till date and just 3,053 tonne stock had been lifted and 26,360 tonne stock was yet to be lifted.

Farmers at the local grain market complained of mismanagement at mandis and demanded that at least drinking water be provided apart from other basic facilities.

Farmers protest rising cases of youths’ death due to drug-abuse

Amritsar: On the call of the Kisan Mazdoor Sangharsh Committee, Punjab, a large number of farmer activists staged a demonstration outside the office of Senior Superintendent of Police (Rural), Amritsar, on the issue of drugs. A good number of labourers and women also participated in the demonstration. Addressing a large gathering, Sarwan Singh Pandher, state general secretary of the KMSC, said the AAP government had promised to address the drug issue on priority. Even as a month had passed, no action had been taken in this regard, they said. Pandher claimed that one or two youths were dying every day due to drugs, but no action was being taken by the government against drugs smugglers. The AAP leaders had promised that they would help check drug abuse and provide employment to youngsters, but nothing had happened so far. Gurbachan Singh Chabba, state office secretary of the party, said, “The police arrest the addicts but not the drug lords who are supplying it. We need results, not number of cases registered by the police.” State leaders Ranjit Singh, Gurlal Singh Mann and Jarmanjit Singh Bandala also addressed the gathering and said the government should immediately stop the drug supply and provide employment to youths addicted to drugs. SP, Amritsar Rural, GS Cheema pacified the agitating farmers and assured that people would see the results within a week.