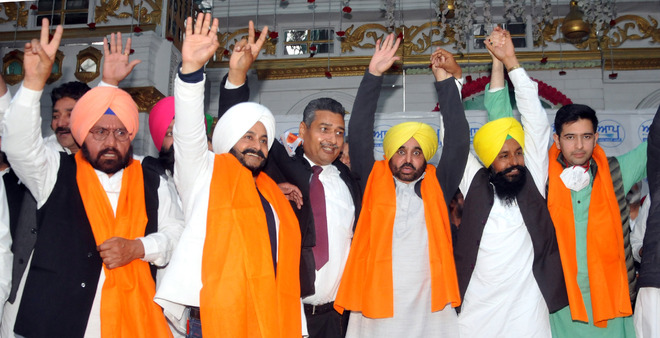 Post civic poll and eyeing 2022 Assembly elections, Aam Aadmi Party (AAP) Punjab's top leadership conducted meetings with all the stakeholders of the party in Amritsar to discuss the upcoming strategies.

The purpose was to analyse the shortcomings and discuss a strategy to strengthen the party’s action plan ahead.

In the recently held civic poll, AAP could not make its presence felt in Majha region. Except for a few wards in Gurdaspur district, it could not open its account anywhere in Amritsar and Tarn Taran districts.

In a statement issued by the party, it was stated that it was making all the efforts to build a stronger team for the upcoming Assembly elections in Punjab. "The people of Punjab seek change and see AAP as a credible alternative. To meet the aspirations of the people, AAP is making strategies to build an indispensable team for the upcoming Assembly elections."

The meetings were convened under the leadership of AAP state president and MP Bhagwant Mann, senior leader of the party and Leader of Opposition (LoP) in the Punjab Assembly Harpal Singh Cheema, party’s Punjab in-charge Jarnail Singh and co-in-charge Raghav Chadha.

AAP, Punjab top leadership is on a two-day tour across the state to hold zone wise meetings. The meetings were held in Amritsar and Jalandhar on Monday, to be followed in Moga and Samrala on Tuesday. “The primary aim of the meetings was to meet all the stakeholders involved in the recent local bodies’ poll and motivate them to keep fighting for the people of Punjab and for a progressive change that the state deserves” said a spokesperson.

In the meetings, the office-bearers, local leaders and MC candidates were also encouraged for the way they had fought despite the bullying by the ruling Congress party with the help of the government machinery.