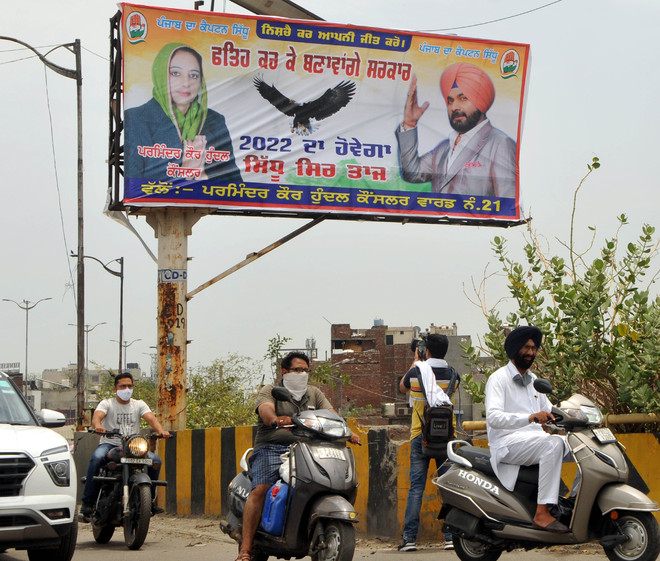 With the core issues of residents apparently taking a back seat, a poster war between the Capt and Sidhu camps has found prominence, yet again!

Amid political crisis in the state Congress, it was the turn of Navjot Singh Sidhu camp this time to show its supremacy over Capt Amarinder Singh’s camp.

This ‘service’ was done on behalf of councillor Parminder Kaur Hundal from Ward No. 21, Verka, falling under the East Constituency represented by Sidhu as a lawmaker.

Justifying it, her husband and Congress worker Master Harpal Singh said residents’ emotions have been expressed in these slogans.

“Captain Amarinder was the ‘Captain’ when he served in the Army. In politics, his influence worked during the 2003 Congress era, but after that, he lost it. During the current term, not a single promise — be it eradication of drug menace, justice in 2015 sacrilege and firing cases or employment to jobless — could be fulfilled. We demand to change the command and urge people to give Sidhu a chance to serve them by voting him to power in 2022. He is the voice of Punjab,” he said.

These hoardings were spotted on Verka roads, main Bhandari Bridge, Ranjit Avenue, bus stand and in other parts of the holy city.

As the tussle between Capt Amarinder and Sidhu grows on social media, both groups are trying hard to garner support before the Congress high command reaches a conclusion.

In Amritsar, local Congress leaders had maintained a distance from the Sidhu couple since the differences between Capt Amarinder and Sidhu came to light leading to ‘attacking’ each other, especially after the alleged leniency in handling the sacrilege incidents and on farm crisis.

Sidhu and his wife, a former lawmaker from Amritsar East, too, have shifted their focus from Amritsar to Patiala in the last few months. The couple had hoisted a black flag atop their residence in Patiala and the same was done by their daughter Rabia in Amritsar to express solidarity with farmers’ cause on May 26. These events were never assisted by local Congress leaders at either of the places.