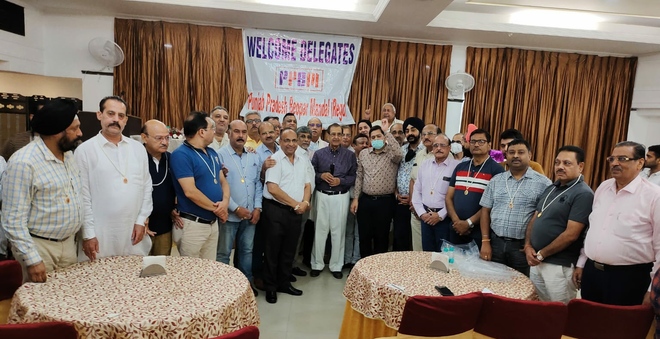 District unit of the Punjab Pradesh Beopar Mandal released a list of their demands in Amritsar on Saturday and threatened to hold public protest in case their demands were not met. Tribune photo

The local chapter of the Punjab Pradesh Beopar Mandal (PPBM) has threatened to hold public protests in case their demands were not met, as it released its list during a meeting of 50 trade and industrial associations held on Saturday night.

Surinder Duggal, president of the local chapter of the PPBM, along with industry leaders SK Wadhwa, Ranjan Aggarwal and others, said only that party will rule the state which will talk about the benefit of trade and industry.

They spoke on innumerable matters concerning trade and industry. They said their matters concerning Punjab State Power Corporation Limited (PSPCL) remain unresolved. For instance, fixed charges imposed on the industry during the lockdown from April 2020 to September 2020 remain un-lifted besides seeking power rate at Rs5 per unit for the industry to bring the indigenous industry on a par with the neighbouring states as far as the power tariffs are concerned.

They urged the state government to offer relief package to textile industrial units under Section 80 1(B) to them by taking it up with the Union Government situated in the border districts of Punjab. They claimed that the same packages were offered to the industries in neighbouring hill state of Himachal Pradesh and Jammu and Kashmir. They asked it to bring in special policies for textile and food processing industries. They stressed that both union and state governments must bring down the quantum of VAT and excise from oil and diesel to offer relief to middle segment of traders and income families.

They urged the Capt Amarinder Singh-led government to set up business hubs in the state to check growing unemployment and menace of addiction among youth. The move will also increase the state’s GDP.

They blamed the government for day-by-day complicating the norms for procuring the GST number. Unlike earlier, now officials carry out physical verification, biometric recording of Aadhaar. They questioned: “Doesn’t it contradict the ambitious policy of ease of doing business?”

They rued that the GST officials were suspending the GST numbers without giving adequate time to contest and appeal to the registered traders.