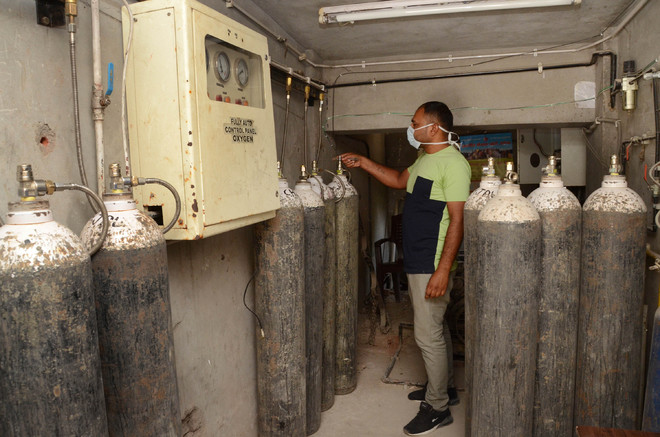 After demand of oxygen shot up in healthcare sector due to the surge in the Covid-19 cases in the district, its prices have also increased manifold in the district.

A cylinder containing seven cubic meter of oxygen, which used to cost around Rs 150 a month ago, now costs between Rs 400 and Rs 500.

There are five units producing oxygen in the city. Proprietor of one of these establishments, Pankaj Kohli, said, “Supply of oxygen to industrial units has been stopped. So, factory output in steel and iron industry is badly hit.” He said price of a cylinder was hovering around Rs 400 after touching Rs 600.

He elaborated that oxygen was required at every step of manufacturing and maintainance of machines. Besides goldsmiths also require oxygen.

Ajit Singh Bhullar, who supplies oxygen to industry and healthcare sector, said between 2,000 and 2,500 cylinders were being produced before the second wave hit.

“The demand from healthcare sector used to stay between 1,100 and 1,700 cylinders daily and the rest were for industrial purpose. Now, all these cylinders have been diverted to hospitals. Besides 200 to 300 cylinders are daily arriving from outside, yet the demand is not being fully met,” said Bhullar.

He said scarcity of liquid oxygen needed to be addressed at the earliest.