Tarn Taran: Principal and teachers of Sri Guru Harkrishan Public School were honoured by International Institute of Hotel Management (IIHM) dedicated to Teachers’ Day. Karamvir Singh Virk, north head, IIHM, presented the awards. The award was received by Ranjit Bhatia principal, Anju Singh, Puneet Chawla, Naveen Jyoti, Harpreet Kaur, Dr Sarabjeet Kaur, Kiranbir Kaur and Monica. The principal of the school said that it was the reward given for the way in which facilitators had adopted modern methods of imparting education to make the future of students brighter. OC 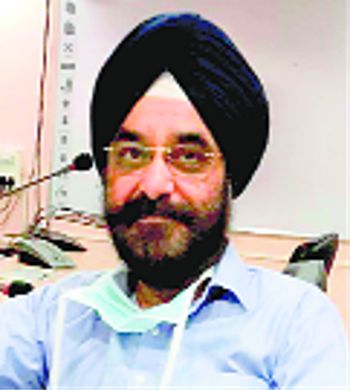 Amritsar: The Royal Society of Chemistry of United Kingdom, the oldest chemical society in the world, recently launched a collection of articles titled ‘Asymmetric Catalysis’ celebrating the 10th anniversary of RSC advances, a scientific journal published under the name of Royal Society of Chemistry. The collection ‘Asymmetric Catalysis’ comprises 23 combined research and review articles, focusing on some of the most cited and downloaded articles published in RSC Advances and Catalysis Science & Technology. Two of the review articles published by Prof (Dr) Swapandeep Singh Chimni (in pic), a faculty member from GNDU, with a total of 179 citations has been recognised by the Royal Society and included in the collection. Prof Chimni, from the Departmemt of Chemistry of Guru Nanak Dev University, has been meticulously working on asymmetric organo catalysis from the last two decades with a total of more than 130 publications.

An atmosphere of bonhomie was on display on the campus as the students began offline session at Global Group of Colleges (GGS). Several students from other states came back to campus after a gap of almost one-and-a-half years. GGC has started offline academic session for all its courses, and even opened hostel facility. Students were overjoyed to meet their classmates and friends after a long gap and the whole campus has been sanitised and all the necessary precautions have been taken by the authorities. The management and faculty shared their excitement so have the students back for normal course of academics. TNS