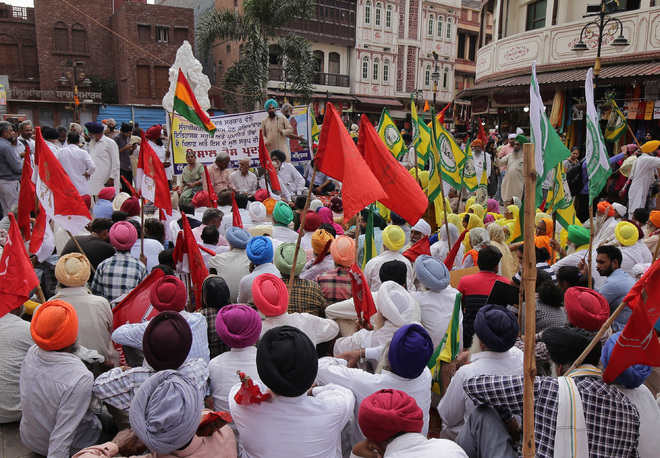 Members of farmers’ organisations, pensioners and employees of Power Corporation led by the Desh Bhagat Yadgaar Committee staged a protest at Jallianwala Bagh here on Saturday. They were criticizing the recent changes made to the Jallianwala Bagh memorial.

The protest supported by the Samyukt Kisan Morcha witnessed a large participation by people. The protesters gathered at Bhandari bridge from where they marched towards Jallianwala Bagh.

The two-hour protest was addressed by Dr Parminder, Prithipal Singh Marimegha, Amolak Singh, Gurmeet Singh, Mangat Ram Pasla, Hardev Arshi, Pargat Singh Jamarai and others. While speaking on the occasion, Dr Parminder said the mischief with which the original character of the monument had been changed was condemnable.

“It was after a failed response from the Chief Minister that the protest was planned,” said Balwinder Singh Dudala, a prominent farmer leader. The Desh Bhagat Yadgaar Committee had earlier written to the Prime Minister, the President, the Jallianwala Bagh Trust and the district administration demanding that the original character of the memorial be restored.

The protesters raised objections to the statues of people in a dance pose installed in the narrow passage leading to the bagh, the renovation of the historical well and an informatory movie shown to the visitors in which Sardar Patel has been highlighted. The leaders stated that leaders such as Shaheed Udham Singh, Baba Sohan Singh Bakhna and others had been ignored. The protesters also raised objection to the posture of Udham Singh’s statue.