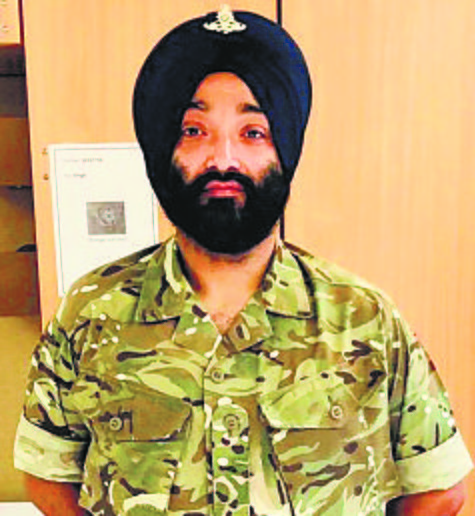 An alumni of Kapurthala’s Lord Krishna College, Harminder has now been selected in the Royal Regiment of Artillery

It was a proud moment for the parents of Harminder Pal Singh (33), who was recruited in the British army.

“I am on cloud nine. Three years of my son’s hard work and focused preparation has finally yielded results,” an elated Salukhan Singh, Harminder’s father, told The Tribune, adding that he was filled with pride and honour, as his son was now a part of the Royal Regiment of Artillery, commonly known as ‘The Gunners’, which is the frontline fighting force of the British Army.

Over 150 Sikhs in British army

Born and brought up in Jalandhar, Harminder, a resident of Ramneek Avenue here, is an electronics and communication engineer, who passed out from Lord Krishna College, Kapurthala. His father said his son always wanted to join the Army, as he was fascinated by the lives of officers, but his dream only got a push when he visited England on a visitor visa in 2017 and met his brother-in-law, who, too, is serving as an officer in the British army, and who gave wings to the dreams of Harminder by motivating him to at least give it a try.

His father said Harminder after completing his studies moved to Australia in 2008 and after working there for nearly eight years, he came back to Jalandhar in 2016.

“My son came back because he wanted to do some reputed job. In the meantime, we fixed his marriage, too! Thereafter, when he visited England, his brother-in-law, Nishan Singh, asked him to join the British army. Inspired by his words, he immediately started his preparation as well as physical training. Eventually, in February 2020, he got selected and just a few months ago he joined the Royal Artillery,” he said. “It’s really a proud moment for everyone in the family, as getting a reputed job in a foreign country is not easy. People are losing jobs already due to Covid and employment has become a serious issue. Thus, I am very much thankful to God for showing us this day. There is no bigger happiness for a father than to see his son live his dream,” said Salukhan, who performs kirtan here, adding that Harminder’s two younger brothers Maninderpal Singh and Jagwinderpal Singh, were also living in Australia at present. While one was still studying, the other one was working.

Meanwhile, Ranjit Kaur, wife of Harminder Singh, said her son, who is just 3-year-old, was very fond of wearing military uniform. She said he also wants to be a soldier like his father when he grows up.