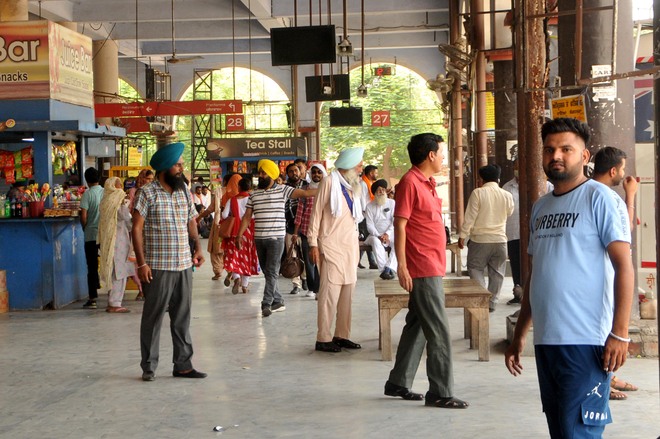 Passengers wait for buses at the ISBT in Amritsar on Monday. photos: Vishal Kumar

Commuters underwent a harrowing experience as members of the Punbus Contractual Workers’ Union applied brakes on nearly 180 buses of Amritsar-I and Amritsar-II depots on Monday.

They also held a four-hour long blockade at the entry and exit gates of Shahid Madan Lal Dhingra Inter-State Bus Terminal here. The government was caught off-guard as they did not have any alternate arrangement in place to handle the situation.

Kuljit Singh, president, Punbus Contractual Workers’ Union, said: “There are about 7,500 contractual workers in Punbus and PRTC across the state and after repeated assurances by the government, they have not been regularised. Of these, about 400 contractual workers are employed in the two depots of the city. I myself am working as a cashier on contractual basis for the last 12 years.”

The staff laid siege to the ISBT for four hours. Barring nearly 15 buses of the Punjab Roadways being driven by regular staff, the rest of the buses remained off road. They plan to continue with the strike till June 30.

“Nearly1,600 contractual workers managed to have cleared the written examination in 2015 and they were assured that they would be regularised after three years,” said Hira Singh, president of the Union from Depot-I, adding that even after the passage of nearly six years, they were not regularised.

Those buses of PUNBUS which managed to pay off their loans have been merged in the Punjab Roadways, but the same rule is not applicable for the staff. Buses under the Punjab Roadways are driven by regular staff and there are no contractual workers under it. The Transport Department did not have any alternate arrangement to ferry passengers, most of whom prefer to drive in its buses after the Capt-led government offered free travel for women in the state-run buses. Next two days are also likely to be a nightmare for passengers.

Members of the local unit of the Punbus Contractual Workers’ Union will join their counterparts from others districts of the state to hold a protest in front of the Moti Bagh Palace in Patiala on Tuesday. As many as 400 members of the union will leave for Patiala from here.