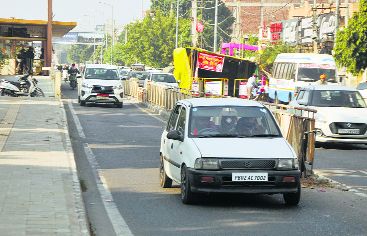 The unauthorised use of dedicated corridor for Metro buses by private vehicles results in inconvenience to both drivers and passengers. photo: Vishal Kumar

The unauthorised use of the Bus Rapid Transport System (BRTS) corridors by private vehicles often result in disruption of the normal flow of metro buses, which are usually available to commuters at an interval of four-minutes, at the bus stops.

Instead of being used by the metro buses and emergency vehicles, these corridors have become free for all as private cars and two-wheelers can often be spotted using these exclusive lanes.

A bus driver said, “Sometimes, cyclists or rickshaws enter the lane because of which they have to slow down the buses.” He added that because of this, they fail to maintain their schedule schedule.

On Monday, a metro bus going towards Kacheri Chowk had to pull sudden brakes as a cyclist, unmindful of the bus, entered the lane suddenly. Many of the passengers fell off their seats and some of them received bruises, said Lovejit Singh, who was travelling in the bus.

The BRTS lanes though were constructed for the metro buses but its use for emergency vehicles, including fire brigade, ambulance, and police vehicles in emergency circumstances is allowed.

Further, the iron grills installed on both the sides of the BRTS corridor have been broken to make way for pedestrians. This too causes the bus drivers to slow their speed to save the pedestrians who are crossing the road at the unauthorised points.

An official associated with metro buses said, “The private vehicles even use the elevated road reserved for the metro buses. We have deputed security personnel at the bridge near the Verka Chowk but still some drivers do not listen to them.” He said it was not possible for them to deploy guards everywhere.