Topped district in the exam held in January also by scoring 99.8 percentile 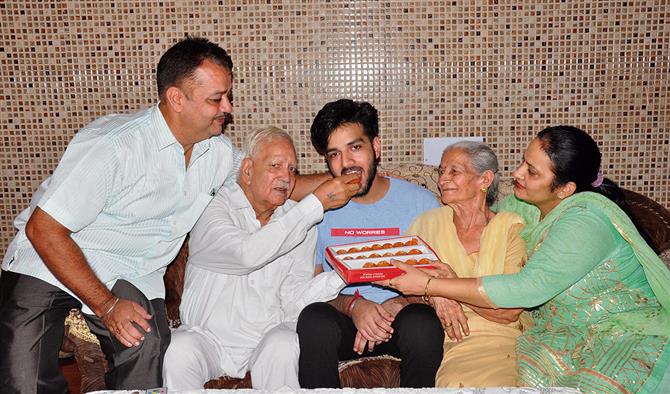 Raghav Khullar, a student of DAV International School, has once again aced the JEE (Main) conducted in September by becoming the top-performing student in the city. With 99.95 percentile, Raghav has managed to get the national rank of 632. The results of the exam were declared late on Friday night.

Earlier, Raghav had topped the district in the examination held in January by scoring 99.8 percentile. Celebrating his success with his family, Raghav looked and sounded more determined than ever to crack the JEE Advance with a good rank. “My aim is to get into IIT, Kharagpur, and purse a degree in computer science and engineering. I want to carry my success from JEE Main to the Advance and hope that I will be able to get the rank I desire,” said Raghav.

Remaining stress-free during the lockdown, Raghav said he spent his time before the exam focussing on his studies and enjoying with his family. “Since the pandemic forced everyone to remain indoors, it got the chance to spend time with my family. I used to spend four-five hours every day on my studies and rest of the time was for family and other things.” He said the pandemic-induced lockdown was a blessing in disguise as it gave students a lot of time to prepare for the JEE (Main). “But it also meant that the competition this time is going to be tough,” he said. He managed to stay focussed through self-study and regular online tests through his coaching institute as he had already finished his coaching before the lockdown.

His father Ashwini Kumar, who is into the shoe business, and mother Meena Khullar, said they were proud of him and hoped that he would make it to the college of his dreams.

Another JEE (Main) merit holder, Kartik, who studies in Bhavan Vidyalaya, Panchkula, has managed to get the national rank of 42. Kartik’s hometown is Amritsar but he has been pursuing his studies from Panchkula, Haryana.

Some other JEE (Main) success stories included those of Pranav Aggarwal, who scored 99.49% percentile and the national rank of 5,749 followed by Harasees Singh (99.4%) and Snehal Dhawan (99.4%). Arhant Arora from Springdales School scored 99.3 percentile. The JEE (Main) is an annual examination conducted by the National Testing Agency and this time around 8.58 lakh students registered and nearly 6.3 lakh appeared for the exam across India amid the Covid-19 pandemic. In the district, 1,683 students had registered for the JEE (Main) conducted in September.