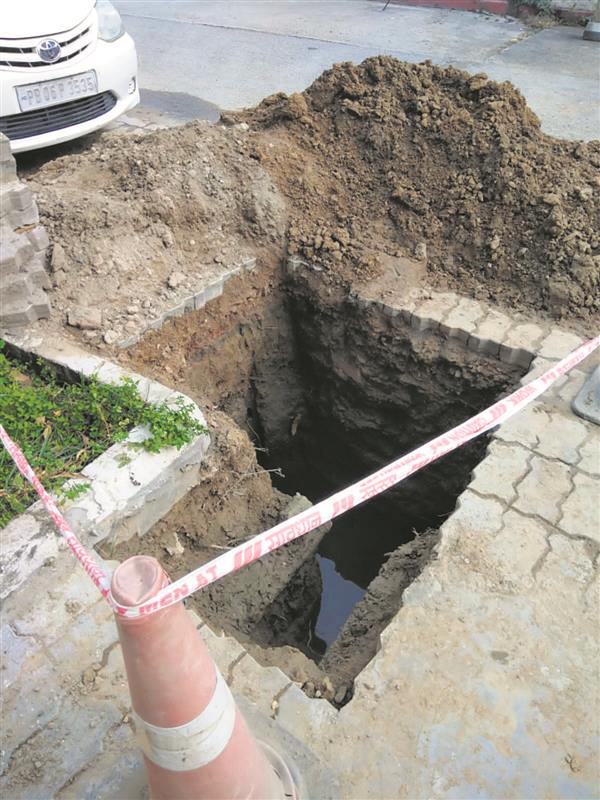 Residents of Ranjit Avenue are irked at Gujarat Gas Private Limited for not repairing punctured water supply pipes and patches on roads in their area in Amritsar. Tribune photo

Residents of the Ranjit Avenue have been irked at a gas pipe laying company for not repairing punctured water supply pipes and refilling the excavated sites in their area. Dr Suresh Chauhan said he filed a complaint a month ago with the authorities concerned and even spoke to the company officials but to no avail.

He said the water supply pipe was damaged in front of the entrance of their flats while laying gas pipes.

However, the company engaged labourers and officials left the place without rectifying the leakage. Leaking water accumulated on the road turning it into a dirty pool of water. Since the fear of infection looms large after the breakout of the Covid-19 pandemic, yet the officials concerned did not take care to fix the issue.

He filed another complaint on December 12 stating that “the workers from the Gujarat gas company damaged the underground water supply pipe while digging a pit in front of our flats and left without filling it, hence jeopardising the safety of the residents. Today, they turned up again, and were about to fill the pit without rectifying the fault. When reminded of the leakage, they left without any response.”

Satyan Trivedi, local head of Gujarat Gas Limited, said as per the state government’s policy under the city gas distribution network, his company deposited the cost of repairing the excavated site in advance to the local government for permanent restoration. He said in this specific case, the water pipe was found completely corroded. He assured to address the issue soon.