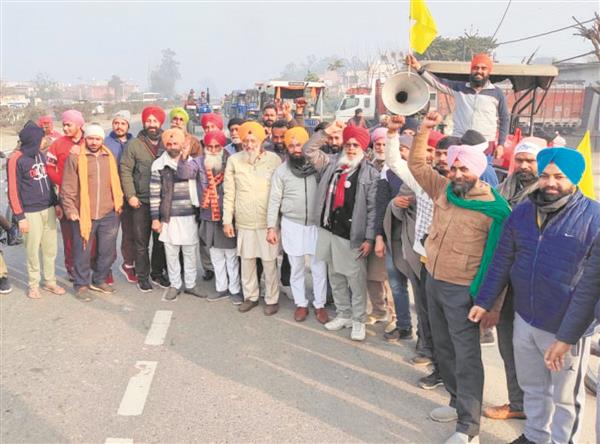 Farmers during the rehearsal of tractor parade at Jandiala Guru near Amritsar onThursday.

Farmers of numerous villages rehearsed for the tractor march scheduled on the Republic Day in Delhi.

Farmer leaders, Bhupinder Singh Tirathpura and Gurbhej Singh Saidolehal, said the objective of the rehearsal was to prepare drivers for the big event. “Drivers are being trained to follow lane driving. Nobody is allowed to overtake vehicles and complete discipline is required,” said Tirathpura.

He said drivers were being taught to communicate with each other while driving safely and follow instructions of the leaders. He said volunteers would be helping throughout the march.

During the march, farmers shouted slogans against the Centre and demanded that the controversial laws be repealed. The union leaders outrightly rejected the Centre’s offer to put on hold the laws for next 18 months. They said the government was trying to end the protest by spreading lies.

The march was organised by the Vegetable Growers’ Association and the All India Kisan Sabha. Gurbhej Singh said tractor-trailers would gather at the Golden Gate by 10 am on January 23 from where they would move together. He said around 1,000 tractors were expected to leave for Delhi on January 23.

Meanwhile, the kisan unions had announced to provide Rs 5,000 for diesel to ensure marginal farmers also join the protest.