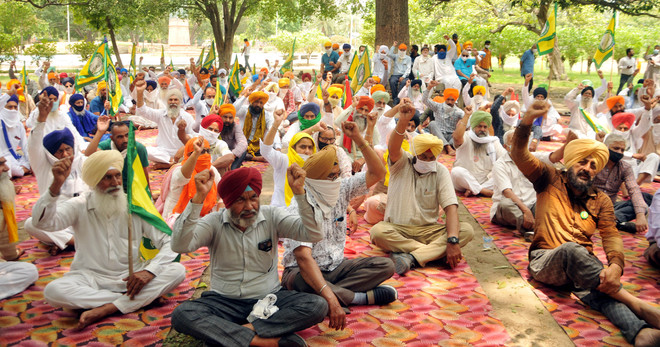 Activists of the Jamhoori Adhikar Sabha raise slogans against the Centre demanding the release of those booked for the Bhima Koregaon violence, in Amritsar on Wednesday. Photo: Vishal Kumar

Activists of the Jamhoori Adhikar Sabha and other like-minded organisations on Wednesday staged a protest and carried out a march while seeking immediate release of those who were booked and arrested for the 2018 Bhima-Koregaon violence.

Holding banners and raising slogans against the Central Government, they accused it of pursuing fascist agenda and appeasing the majority government. The protesters assembled at the Company Garden and later marched to the Hall Gate to send out their message among masses.

Sumit Singh, leader of Tarksheel Punjab, said intellectuals from diverse fields were put behind bars by naming them in violence and booked under the stringent norms of the UAPA. He said those held were famous as democratic rights activists, counsels, writers, stage artistes, journalists and from other professions. He said the government was steadfastly violating democratic rights of individuals and eroding the value of high offices to pursue its fascist agenda.

Dr Parminder Singh, leader of the sabha, sought that democratic rights of those lodged for the 2018 violence must be restored as no investigative agency of the country managed to prove their involvement in the violence.