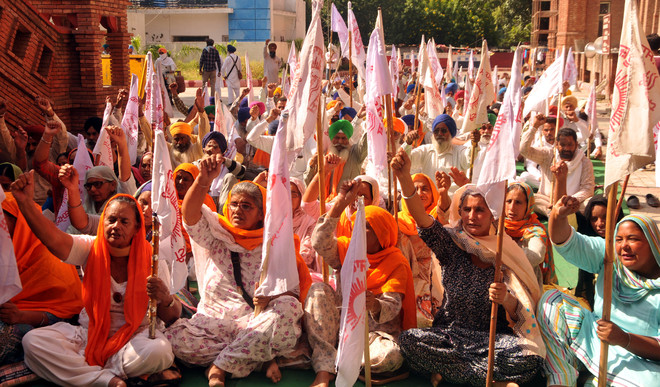 Members of the Kisan Mazdoor Sangharsh Committee hold a protest outside the DC office in Amritsar.

Farmers under the banner of Kisan Mazdoor Sangharsh Committee (KMSC) staged a protest outside the Deputy Commissioner’s office here on Tuesday. They were demanding the removal of Minister of State for Home Ajay Mishra from the Union Cabinet.

Further, members of farmers’ unions, united under the Samyukt Kisan Morcha (SKM), submitted memorandums addressed to the President regarding the sacking of the Union minister who, they alleged, was responsible for hatching a conspiracy to mow down farmers in Lakhimpur Kheri district of UP.

While the SKM leaders announced to submit memorandums with focus on the Lakhimpuri Kheri incident, the KMSC had planned to stage protests at the district headquarters to demand the resolution of other issues such as compensation for crop loss due to hailstorm, removal of bottlenecks in the sale of paddy, shortage of DAP and implementation of demands earlier accepted by the state government.

KMSC general secretary Sarwan Singh Pandher said protests were held at headquarters of nine districts in the state. Notably, KMSC is not part of the SKM, but they are protesting the three controversial agriculture laws. Pandher accused the Central Government of punishing Punjab farmers by not sending sufficient amount of DAP. He said the state government had failed to check black marketing of the fertiliser.

He said the skyrocketing prices of fuel, which is mostly consumed for harvesting and wheat sowing, had hit the farmers hard. He said with Ajay Mishra still in the Cabinet, he could influence the investigation and intimidate eye-witnesses. The BJP government was trying to save a criminal who had allegedly planned to kill innocent farmers in broad daylight.