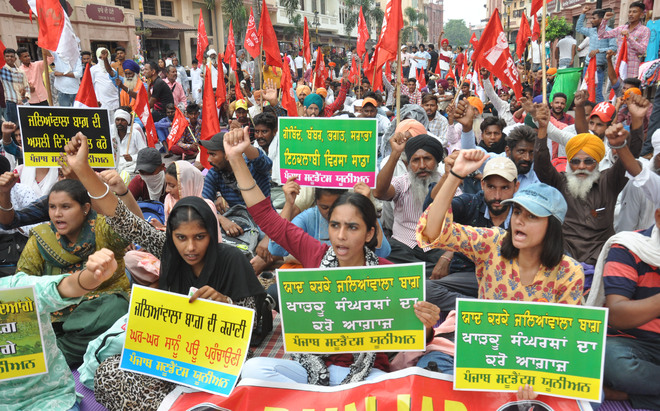 Members of the Naujwan Bharat Sabha and the Punjab Students’ Union stage a protest outside Jallianwala Bagh against its makeover in Amritsar on Tuesday. Tribune photo: Sunil Kumar

The Naujwan Bharat Sabha and the Punjab Students’ Union while condemning the alleged tinkering with the historic character of the Jallianwala Bagh monument in the name of renovation started an indefinite morcha outside the bagh here on Tuesday.

A delegation of the two organisations reached to mark the 114th birth anniversary of the great martyr Shaheed Bhagat Singh here and they declared that their agitation would continue till the original structure of the historic bagh was restored to its previous shape.

Rupinder Singh Chonda and Ranvir Randhawa, presidents of the Naujwan Bharat Sabha and the Punjab Students’ Union, respectively, alleged that the Central Government led by the Bharatiya Janata Party were hell bent on destroying the traces of those who fought against fascism and corporate culture.

Manga Azad, general secretary of the sabha, said the Modi government and the Punjab Government had deliberately distorted the historic character of the monument and the ticket counters were opened in it to mint money.

He said another door was opened in the bagh, which had deeply hit the historic character. He said the names of Muslim martyrs and their pictures were removed from the gallery and the martyrs’ well was beautified.

He said the Shaheedi Smarak was shifted to another place and the embossed figures were prepared on the entry street which was the only entry and exit point of the bagh. The leaders of the two organisations announced to hold a permanent dharna outside the historic bagh until their demand of restoring it to the original structure was met.