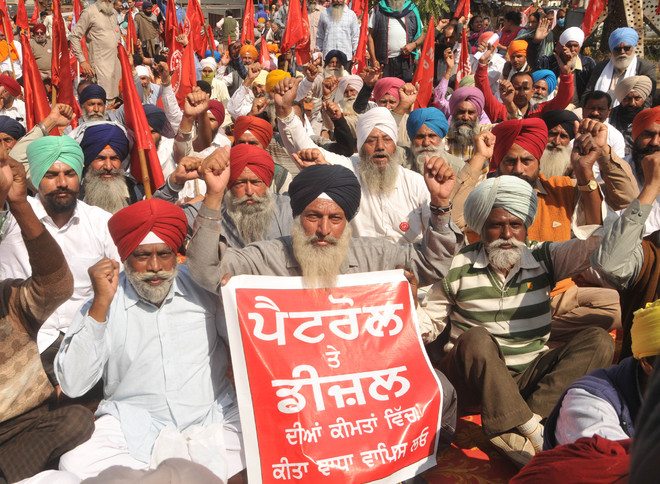 Members of the CPI and CPM protest demanding the quashing of cases and legal notices against protesters and high fuel and LPG prices in Amritsar on Thursday. tribune photo: Vishal Kumar

Members of Left parties staged a protest at the Bhandari bridge on Wednesday to support the farmers’ demand for repealing the three controversial farm laws.

Leaders of the CPI and the CPM stated that the government was indifferent towards the plight of the farmers and had not shown any compassion even after the deaths of over 250 farmers during the ongoing protest.

Leader Vijay Mishra said the government must introduce a law to guarantee the minimum support price (MSP) for agricultural produce of the farmers. He said farmers all over the country were in a pitiable condition and efforts must be made to improve their economic condition. While speaking on the occasion, Amarjit Singh Asal condemned the Central Government and stated that the incidents of violence that happened in Delhi on January 26 in Delhi happened due to politics by the BJP. He stated that the farmers’ agitation was gaining momentum all across the country and the government should not ignore the sentiments of people.