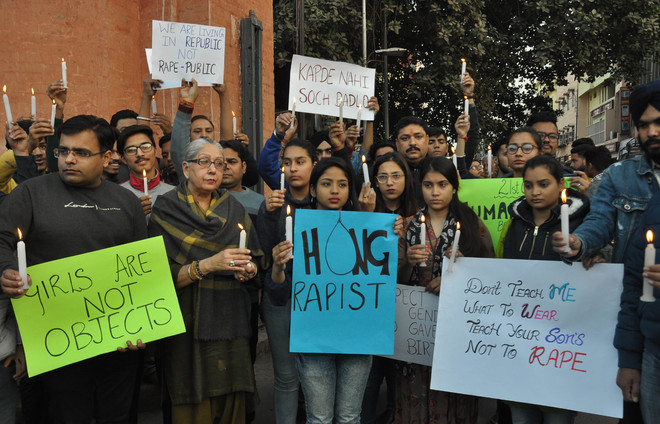 Students and social workers hold placards during a protest in Amritsar on Sunday. Sunil Kumar

A group of students and members of civil society held a candle march in protest of the rape of a 27-year-old female veterinarian in Hyderabad, on Sunday. The march commenced from Hall Gate and and concluded at Jallianwala Bagh, covering Hall Gate and Partition Museum.

The march was jointly organised by Kanika Gupta, a student of BBK DAV College for Women, and the Voice of Amritsar, a local NGO. It was joined by members of local NGOs, students and residents. The protestors were seen holding banners demanding stricter punishment for the offenders. Students expressed their anger over the incident.

Indu Aurora from the Voice of Amritsar, said: “It is such a grave crime that deserves strict punishment. There should be stringent laws and proper implementation of these laws. The atmosphere is increasingly becoming dangerous for children, especially the girls.”

“Some solution to the problem should be found out. Every time a rape happens, there are talks of reforms but little action is undertaken. A change has to be brought,” added another protester.