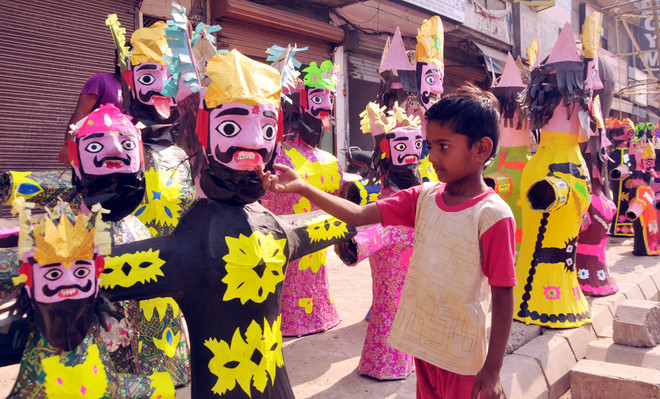 A child has a look at the effigies of Ravana put up in a street for sale ahead of Dasehra in Amritsar on Wednesday. Photo: Vishal Kumar

Reeling under the effects of pandemic since last year, artists, who earned their living by making effigies of ‘Ravana’, ‘Meghnad’ and ‘Kumbhkarana’ stare at another disappointing season as the demand for effigies has gone down drastically.

An otherwise busy Dasehra season used to begin for these artists a month before the festivities as bulk orders were received for making effigies. Since no-show last year and impact of inflation and restricted festivities families of these artists are now work as daily wagers to earn their livelihood.

Rama, whose family has been making Dasehra effigies from the past 30 years, says they had received only three orders this year. “We used to make at least 20 to 30 effigies during this time earlier, but this year only three orders have been completed. There are 15 members in our family, who are in this business of making effigies. With no work, our income has taken a big hit. We have not earned enough to properly feed our family,” he shared.

Rama works with 10 other artists in his team, who have similar woes to share. “Most artists, who used to make Ravana effigies, have become vegetable vendors or work as labourers. The ones, who have been issued permit by the authorities concerned, can make effigies and sell them. The rest are looking for other employment opportunities,” Rama added.

Inflation has also affected the effigy making business. The prices of raw materials used to make effigies have almost doubled in the past three years. The price of wood and bamboo used in the effigy has increased from Rs120 per kg to Rs180 per kg. The paper, which artists used to get at Rs10 per kg, is now available at Rs35 per kg today. In such a situation, making Ravana effigy has become twice expensive as compared to the previous years. Ravana effigy used to be ready for Rs500 per foot, but today it is selling at Rs1,000 per foot.

The families in Shekhan Da Karkhana, near Lahori Gate, have been making Ravana effigies both big and small since many decades. While the smaller ones are made and sold at Rs100 to Rs150 per piece, the price of bigger effigies has gone up considerably.

Joginder Singh, who has been making Ravana effigies for the last 55 years, says, “Only five to six families are now in the effigy making business in the city. Last year, permission was not given to make effigies due to the Covid pandemic. Ravana effigies were not burnt anywhere except in some rural areas last year. This year, there are not more than six to seven orders across the city. Apart from Ranjit Avenue, there are some big orders from the rural area too, but that doesn’t suffice for the business. Earlier, there were 30 to 35 orders for bigger effigies every year.”

The tallest effigy is of 130-ft Ravana

This year, the Dasehra festivities will be held at three locations only. The tallest Ravana effigy with a height of 130 ft will be erected at Trillium Mall while 125 ft Ravana will be burnt at Dasehra ground in Ranjit Avenue. Third venue for celebrations will be at Dasehra Ground, near Bada Hanuman Temple.

Dasehra celebrated with fervour across district

Victory of good over evil: Students celebrate Dasehra with fervour in city

City students make it to IITs after strenuous efforts