Rising population: Couple’s backward walk at Jallianwala Bagh for a cause 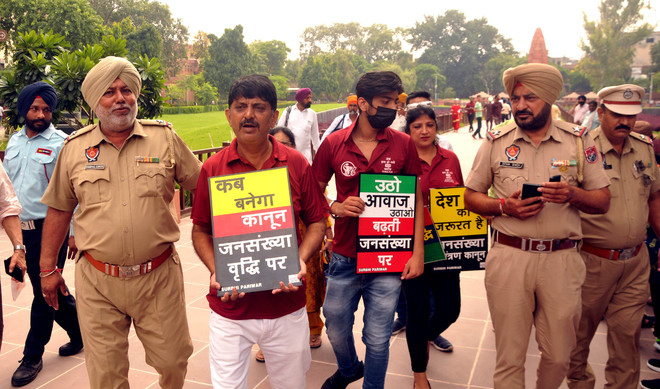 A Meerut-based couple and their kids create awareness against rising population, at Jallianwala Bagh in Amritsar on Friday.

A Meerut-based couple took to ‘reverse walk’ to sensitise the government and residents about adverse effects of increasing population. Dinesh Talwar (49), with his wife Disha, and their two children reached Jallianwala Bagh.

As they walked backwards carrying placards bearing a picture of Prime Minister Narendra Modi and slogans ‘Ek kanoon jansankhiya vridhi par bhi’ and ‘Utho awaaz uthao badhti jansankhya par’ , they were intercepted by the police, as they violated Section 144 imposed in the vicinity of Jallianwala Bagh. However, the issue was resolved amicably, as the couple conducted a peaceful march just to attract visitors’ attention towards rising population in the country. Dinesh said they belong to Meerut where the 1857 Revolution was conceptualised. “As Punjab will go to the polls in 2022, when a neta comes to you, just question them about what will be their agenda about population control,” he said.

The couple expressed regret over the fact that no government has acknowledged their cause so far. “The government is not bothered that the population of the country at the time of Independence was 33 crore, which increased to over 125 crore. Post-Independence, no concrete measures were taken to control population. The Bill to ban people having more than two children from contesting elections has still not been tabled in Parliament since 1992,” said Dinesh.

Around 28 years ago, Dinesh had started this campaign from his hometown. Associated with insurance sector, Dinesh claimed that they had visited at least 365 cities, held hunger strike at Jantar Mantar, submitted 5,000 memorandums and dispatched 90,000 postcards to various Prime Ministers, ministers and officials. “In 1994, I started walking reverse to project the government’s negative and backward approach,” he said.

Disha said people certainly look back and question us about our motive. “Even our daughter Simran and son Yash have been accompanying us to promote the cause. I am dispatching one postcard daily since 1997, but got no response. We submit our attendance at the offices of Deputy Commissioners in every city we visit and dispatch the letter to the PM and the Home Department in this regard,” she said.