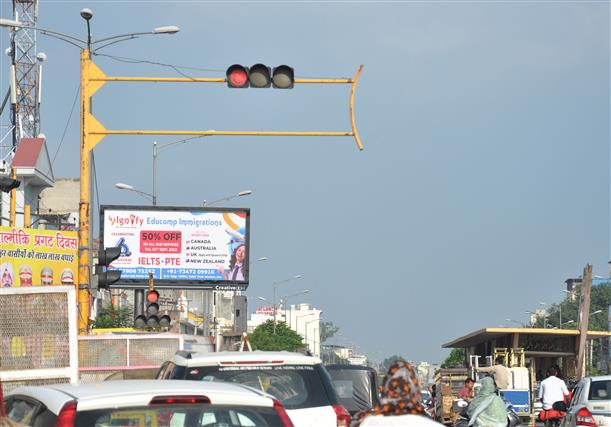 A view of traffic lights in Amritsar. Sunil kumar

Six years after the holy city was declared to be developed as a Smart City, its road infrastructure-related basic requirements like digital clocks at traffic lights, tow-away zones, designated protest sites, etc, have not yet been fulfilled. The ever-rising number of vehicles and shrinking road space necessitate widening roads, using modern gadgets, devising a plan and paying more attention to tackle the problem.

For instance, many intersection traffic lights have not been provided with a digital clock to alert motorists to turn off/on ignition. Similarly, the city does not have a designated protest site, tow-away zones, separate lanes for autos and rickshaws, one-way traffic, paid parking zones, etc.

Anil Kumar, a resident of Basant Avenue, says traffic scene is worsening day by day. The volume of traffic has increased manifold in the city with a large number of floating population, most of whom come from nearby towns and villages for work. He stated that he had submitted a memorandum of demands to improve traffic scene in the city over a year ago, but no action has been taken by the government.

He says the traffic police do not have its own tow-away vehicles, so there is no such zone in the city. There are some no-vehicle zones, but the authorities are not in a position to enforce the law in this regard as the pact with a private company to provide tow-away vehicles has not been revived.

In the absence of digital clocks at traffic lights, motorists keep the ignition of their vehicles on causing pollution and a loss of costly petrol. Undoubtedly, equipped with limited staff, traffic police have the onerous task of managing fast-moving traffic.

Abhit Arora, a local resident, said, “Since there is no digital clock to alert motorists, most of whom are in a hurry to reach their destination, they tend to keep the ignition of their vehicles on.” With traffic lights taking a minute or two to turn green these days, motorists can at least save on the precious petrol by switching off their vehicles. Thus, we can save barrels of fuel, besides stopping emission of harmful gases in the environment.

Anup Saini, in-charge, Traffic Police, said there were 37 intersections with traffic lights and a request for installing digital clocks at 13 more light points had been forwarded. He said camera-enabled smart lights would replace the present lights under the Smart City project by the end of this year.