Tomorrow onwards, 50% shops can open from 9am to 5pm 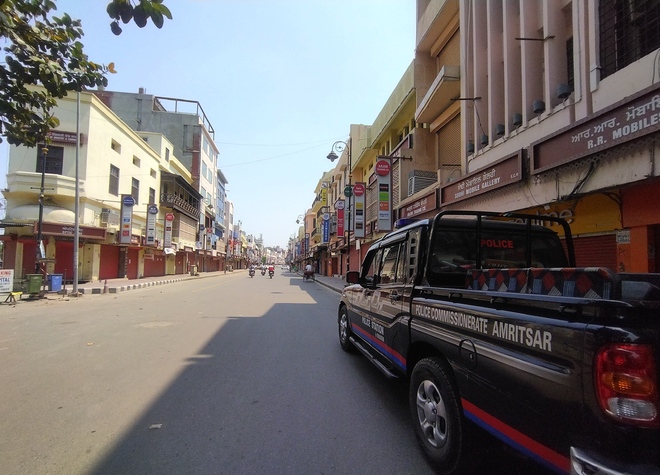 The Hall Bazaar wears a deserted look due to the weekend lockdown in Amritsar on Saturday. Photo: Sunil kumar

In a new set of relaxations for shopkeepers, the district administration has done away with the system of essential and non-essential categories and allowed all shops to open from 9 am to 5 pm. As per the new orders, all shops would open on a rotation basis. The new system would come into force from Monday after the weekend curfew ends.

The DC said in case any particular road or street has shops on its one side only, then only half of these would be allowed to open. “The idea is to allow only 50 per cent shops to open on any day to check crowds,” said Khaira.

In the beginning of the current lockdown, the government had allowed only essential-item category shops to open. Later, the shops as agriculture tools and inputs, industry related shops and even liquor vends were added to the essential list. However, this had created resentment among the shopkeepers whose shops did not fall in the essential category.

The DC said it was the responsibility of the shopkeepers to follow the roster strictly and any violation would be punished with the sealing of the shop for at least one month.