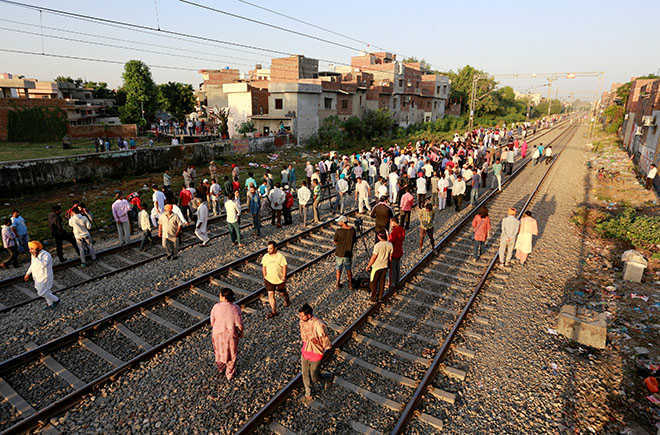 Locals gather on the tracks after the tragedy in Amritsar. File photo

Madaan was one of the prime suspects in the Dasehra train tragedy near Jaura Phatak that claimed over 50 lives in October 2018. He along with six others were named in the FIR registered by the Government Railway police on the charges of causing death by negligence (Section 304-A, IPC). The GRP had submitted a challan in the court without their arrest. He is currently out on bail.

Both the magisterial probe and GRP SIT had also held Railways, MC and police responsible for the tragedy.

Mithu Madaan, son of woman Congress councillor Vijay Madaan, had organised the programme to distribute blankets to the poor outside the Pingalwara area on Saturday. Gill was the chief guest at the event.

Madaan said the programme was organised for the poor and destitute on the roadside as the winter has set in. “My team is visiting different areas on alternate days. Till now we have distributed around 300 blankets and we have a target of distributing around 2,000 blankets,” he told.

The Police Commissioner said as it was a noble cause, therefore he participated in the programme. He said he was going to the Golden Temple for paying obeisance when he got a call about distribution of blankets to the poor.

He said during the pandemic the Punjab Police had distributed ration and other essentials to the needy with the help of many people and NGOs. “Why no controversy erupted at that time?” he asked. He said the idea was to motivate people to do serve society. He said participating in the programme does not mean that a clean chit has been given to any suspect. — TNS

‘It was a noble cause’

Police Commissioner Dr Sukhchain Singh Gill said as it was a noble cause, therefore, he participated in the programme