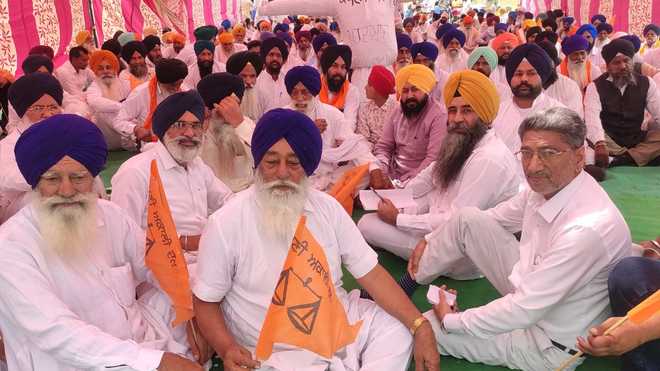 Tarn Taran: SAD workers under the leadership of Alwinderpal Singh Pakhoke, former SGPC chief and in-charge of Khadoor Sahib Vidhan Sabha constituency, organised a dharna in Naurangabad village against Punjab Chief Minister Amarinder Singh and AAP supremo Arvind Kejriwal. SAD workers burnt the effigies of Capt Amarinder Singh and Arvind Kejriwal and raised slogans for misguiding people. Besides Pakhoke, former Zila Parishad member Gurinder Singh Toni, Kuldeep Singh Aulakh, Dalbir Singh Jahangir were among others who addressed on the occasion. They attacked the performance of the state government and said not even a single promise had been fulfilled so far and Capt Amarinder Singh was misguiding people in the name of welfare schemes launched by the previous Badal government. They said farmers were waiting to get their loans waived and timely payments of monthly pension under social security schemes. The leaders said AAP supremo was having dual views over the river waters, which was discrimination with the state of Punjab. OC
SHARE ARTICLE