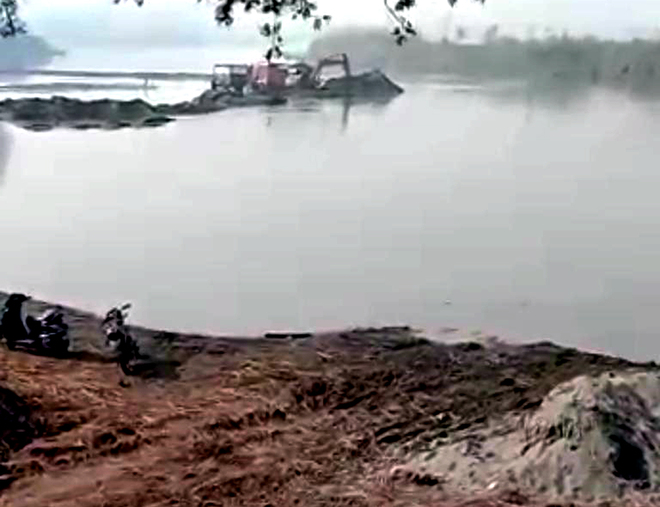 Even as the government claims to take action against different types of mafias operating in the state, the sand mafia is having a field day in Ajnala sector it seems, as hundreds of trucks are seen ferrying sand.

Residents of Kot Raizada village in the area complained that the sand mafia had dug up deep pits in the riverbed and lands adjacent to it.

Sukhjinder Singh, a resident, said: “At least 2,000 trucks of sand are being mined daily from the riverbed and nearby fields. We fear that due to deep pits that are dug up, our fields adjoining the illegal sand mines would be eroded.”

Residents complained that the village road has also been destroyed by heavy sand trucks. They claimed that they have filed numerous complaints with the police and civil administration.

“After a complaint is filed, everything becomes quiet for a few days. Then again, the activity starts. The villagers dare not question the contractors or their goons,” said Sher Singh, another resident. He said the henchmen of contractors threaten local people if they question their illegal activities.

Apart from Kot Raizada village, the sand mafia is also active in Bhindi village. Residents said a few villagers support the mafia for easy money, as a result of which common people do not have any say. The high prices of sand, despite the government capping the prices at Rs5.5 per cubic feet, enable sand mafia to earn huge profits.

Residents said the agricultural lands adjoining the riverbed are most vulnerable. “Farmers can only grow sugarcane as it is a hardy crop. Many farmers have stopped tilling their lands altogether due to losses. Such lands are easily available to the sand mafia,” said another resident Iqbal Singh. He said the owners of the fields adjacent to the one from where sand was being mined have no option but to succumb to their pressure.

A farmer leader Rattan Singh Randhawa said: “People have been suffering for long as the drivers and workers of the sand contractors have made life miserable for them. The women fear going out alone as drivers and goons of sand mafia, who often are under the influence of drugs, misbehave with them.” He said government action against the mafia must not be restricted to newspaper and television channels. “People in Kot Raizada are waiting for the government to take action against the sand mafia,” he said.