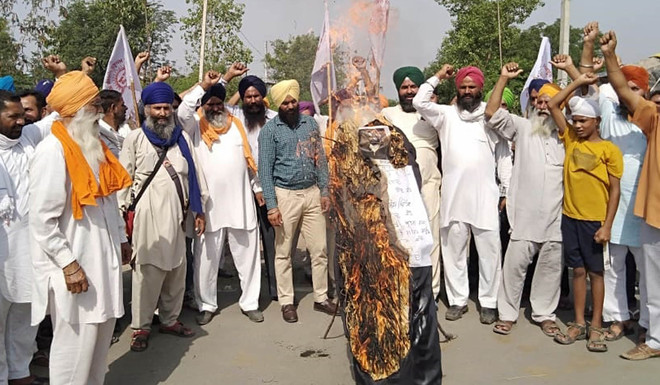 Farmers burn an effigy of Punjab Chief Minister Capt Amarinder Singh during a protest against the shortage of power supply for tubewells on Tarn Taran Road, Amritsar, on Tuesday. Vishal kumar

Farmers under the banner of Kisan Mazdoor Sangharsh Committee blocked traffic near Gurwali on the Amritsar-Harike highway on Tuesday to protest against insufficient power supply to tube wells amid the paddy transplanting season.

The farmer leaders said the government had failed to provide 8-hour daily power supply to tubewells as announced by it. KMSC general secretary Gurbachan Singh Chabba said: “The tubewells are being given power supply of 5-6 hours daily. We demand that a minimum 8-hour uninterrupted power supply be insured.”

The association members raised slogans against the state government and the Power Corporation. They accused the government of running away from its promise of providing 8-hour power during paddy transplantation season. “We also want that the Power Corporation should not unnecessarily harass farmers in case a transformer is stolen or damaged. All such transformers should be replaced within 24-hours,” said Chabba.

Farmers complained that paddy transplantation is getting delayed due to shortage of power. They said they need water for puddling fields so that paddy saplings could be planted.

They alleged that late sown paddy would ripen up late when temperature decreases and it would have more moisture than the permissible limit. They said farmers would face trouble in selling produce with more moisture.

Tarn Taran: A deputation of the Border Area Sangharsh Committee, led by its president Arsal Singh Sandhu, on Tuesday presented a memorandum to Deputy Commissioner Kulwant Singh on the problems being faced by farmers of the border area. Daljit Singh Dialpura, leader of the organisation, apprised the DC of the farmers’ problems. He said farmers having their land across the fence had not been paid compensation of Rs 10,000 per acre a year for the last three years. He said the farmers were already facing acute financial hardship due to anti-farmer policies of the government. He said roads in the border area were in worse condition and even the Amritsar-Khemkaran national highway inundated with water at several places. The organisation alleged that the farmers, who go across the fence in their fields, were being harassed by the BSF personnel on one pretext or another. The organisation warned the administration of redressing their problems at the earlier otherwise they would be compelled to launch an agitation. The Deputy Commissioner has forwarded the memorandum to the District Revenue Officer for further action. OC