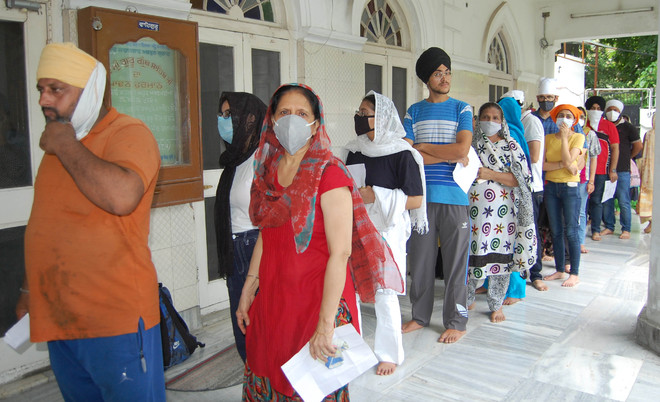 People wait for Covid vaccination at a camp in Amritsar . Tribune photo

The second wave of the Covid-19 disease seems to be ebbing with the district reporting 324 cases and 20 deaths due to the disease in the month of July.

Comparatively, the district had reported a total of 2,039 cases in June while the death toll stood at 108 during the month. Life in the city is slowly returning to normal as the panic created by the infection is subsiding.

The district had witnessed the peak of the second wave in May when it had reported a total of 12,194 cases and 495 deaths in the month. From a few hundred cases each day to only a few cases daily, the situation is taking a turn for the better.

In the last fortnight, the number of daily cases has come down to a single digit. However, health experts stated that the residents must not lower their guard in view of the apprehensions of a third wave.

Civil Surgeon Dr Charanjit Singh said, “The residents are advised to continue following proper safety guidelines. The situation has improved a lot during the last one month, but it is not over yet.” He said the government was keeping a watch on the situation. “The Health Department has put proper arrangements in place to deal with the third wave,” he said.

The second wave of the contagion had begun after mid-February after which the number of Covid-19 cases and deaths increased drastically over the next three months. With the situation now taking a positive turn, the health teams too are heaving a sigh of relief.

Meanwhile, a total of 6,602 residents were inoculated during the ongoing vaccination drive on Saturday. Of these, 3,895 were administered the first dose of the vaccine, while 2,707 received the second dose.

Amritsar: With one death reported due to Covid in the past 24 hours, the district toll increased to 1,585 on Saturday. The deceased has been identified Malook Singh, a 75-year-old resident of Athwal Village near Majitha. The district reported five fresh cases on Saturday. A total of 6,602 residents were inoculated on Saturday. TNS

One covid positive case and no death due to the covid infection had been reported in the district on Saturday. As many as 373 residents have lost their lives to Covid in the district till date. OC