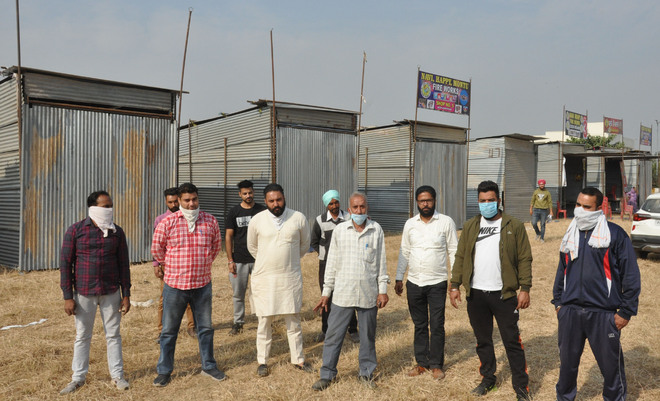 Amrisar district administration is likely to issue 10 licences for the retail sale of firecrackers ahead of Diwali on Wednesday.

The district administration is likely to issue 10 licences for the retail sale of firecrackers ahead of Diwali on Wednesday.

The Amritsar Fireworks Association, chief, Harish Dhawan, said they would get only three days for the sale of firecrackers starting tomorrow. He asked how can they sell crackers procured from the National Capital Region (NCR) in such a short span when their stocks were lying full.

He said over Rs80,000 was invested in setting up temporary kiosks as the Improvement Trust charged Rs34,267 and Rs30,000 for establishing it. In addition, fire extinguishers were procured and miscellaneous expenses would take the total investment on temporary cracker market in New Amritsar area to over Rs80,000 per head.

Traders said crackers emanating minimum pollution were procured from Sivakasi (Tamil Nadu) this time. Officials of the Explosive Department carried out the inspection of all godowns. There are 32 licence holders in the city who deal in the manufacturing, storage and possession of crackers. These include two Union Government licenced firecracker manufacturing units and over 30 storages, with each of them having a capacity to maintain nearly 1,500-kg stock.

The Petroleum and Explosive Safety Organisation (PESO), Department for Promotion of Industry and Internal Trade, Ministry of Commerce and Industries, allocates licences to those traders, who want to sale and store firecrackers above 600 kg.

Two major firecracker manufacturing units in the district are situated at Ibban Kala village on the Chhabal road and another at Rajewal village on the Amritsar-Jalandhar GT Road. These are allowed to manufacture phuljhadi (sparkle) and anaar (flower pot).

In addition, there are 15 godowns for sale and stock at Rajewal village.

Earlier, the administration had received 2,800 applications for setting up 10 retail counters of firecrackers for the festive season.

What the rules say

Had we been given licences some days before, this would have offered enough time to buyers to procure crackers. Thus, it would have avoided gathering of a large number of people thereby ensuring implementation of social distancing norm. Varinder Singh, a cracker trader

Our counterparts in Jalandhar and Ludhiana have already been permitted to open shops two days in advance. We were denied trade on a par in the region. Romi Singh, another trader

The licences for the retail sale of firecrackers will be released only after going through the latest orders of the National Green Tribunal. Action would be taken against those who sell crackers without having relevant licence. Jagmohan Singh, DCP (Law & Order)