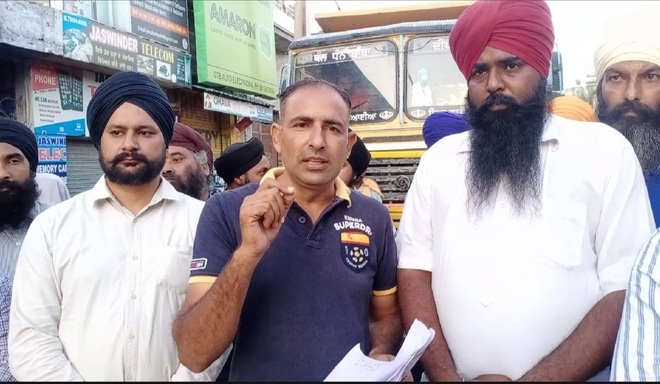 Mandeep Singh Dhardeo, who has been arrested by the police for damaging road.

As many as seven activists, including a woman, have been booked in this regard. Mandeep Singh Dhardeo, who was leading the demonstration, has been arrested on the complaint of the chief security officer (CSO) of the sugar mill.

ASI Parshotam Lal, the investigating officer in the case registered at the Mehta police station, said the chief security officer of Rana Sugar Mill had complained that its management had hired tractor-trailers to ferry paddy straw for boilers of the mill. The accused blocked movement of tractor-trailers by holding a sit-in on the road, the ASI added. They had also installed iron rods on the road to stop the movement of vehicles, said the ASI. They had damaged the road, the ASI added.

On the complaint of the CSO, the police arrested Madeep Dhardeo and other demonstrators and registered a case against them for damaging public property, said the ASI.

Earlier, Dhardheo held a demonstration and blocked the traffic at Buttar Sivian village on October 18. He had claimed that panchayats of three villages had passed a resolution to not to allow vehicles of the mill in the village.

The Dayalgarh gram panchayat sarpanch, Charanjit Singh, claimed that in case of accidents with tractor-trailers people didn’t dare to file police complaints as the mill owner was an influential politician.

The activists were fighting against the mill management for causing air and water pollution in the area for the past several years, he added.