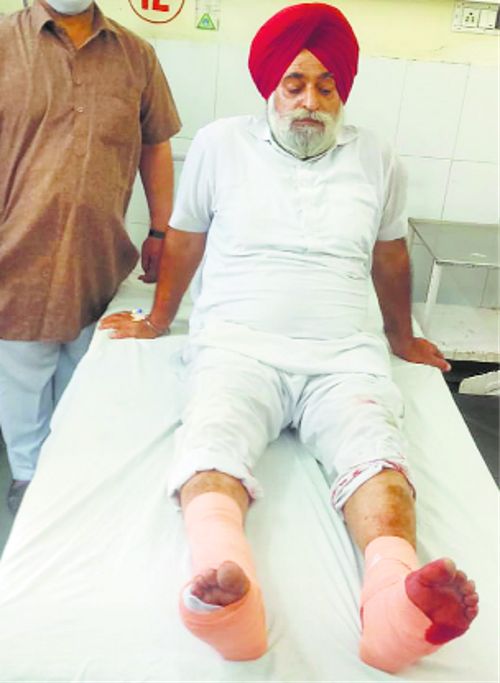 A shopkeeper was shot at and injured in Patti town by two unidentified car-borne assailants here on Tuesday. The injured shopkeeper has been identified as Balwinder Singh Billa (50) of Patti.

A shopkeeper was shot at and injured in Patti town by two unidentified car-borne assailants here on Tuesday. The injured shopkeeper has been identified as Balwinder Singh Billa (50) of Patti.

He was attacked when he had just reached outside his shop to open it. The injured shopkeeper was admitted to the Civil Hospital, Patti, where his condition was stated to be out of danger.

SI Parwinder Singh, SHO, Patti city, said a case under Sections 307 and 34, IPC, and Sections 25, 54 and 59 of the Arms Act had been registered. He said the police had recovered three empty rounds of 9 mm revolver from the spot.

The SHO said the shopkeeper, who was running a furniture shop on the Lahore road in Patti, had come on his moped when Swift car-borne assailants appeared on the spot the same moment.

One of the assailants came out of the car and opened firing on Balwinder Singh who received injuries on his lower parts of the legs. The assailants managed to escape from the spot after committing the crime. Asked about the possibility of involvement of persons in the attack, the injured pointed the finger, though not sure about that, at those persons with whom he had a property dispute. The police were analysing footages of CCTV cameras installed in the area. The word ‘Sarpanch’ in Punjabi language was written at the front and back of the car used in the crime. SAD leaders Gurcharan Singh Chann and councillor Dharminder Singh have demanded the arrest of the accused.

The SAD leaders had taken a serious note of the poor law and order situation in urban and rural areas of the district.