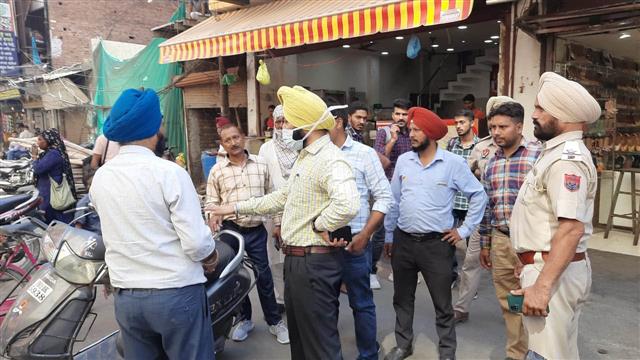 In view of Parkash Purb of Guru Ram Das, a team of the estate wing led by Estate Officer Dharminderjit Singh, visited the area around the Golden Temple today, to remove encroachments, which pose hurdles to commuters and pedestrians.

Vendors and shopkeepers opposed the drive and raised slogans against the Amritsar Municipal Corporation and the Shiromani Gurdwara Parbandhak Committee (SGPC).

Officials of the MC filed a complaint against three shopkeepers, including a dhaba owner, to the Commissioner of Police for allegedly misbehaving and abusing the civic body staff.

As the team reached backside of Akhara Baba Shri Chand, a few shopkeepers opposed the move.

The Estate Officer said as per the decision taken during a meeting of SGPC with the administration on October 9, it was decided to remove illegal occupants, ahead of Parkash Purb.

As shopkeepers raised slogans, a large number of people gathered on the spot. The MC’s earth mover was seized by mob and employees were abused. As a result, the operation had to be stopped .

“Arrival of pilgrims increases during festive season. We appealed to vendors and shopkeepers not to illegally occupy the footpaths and corridors,” said the Estate Officer.