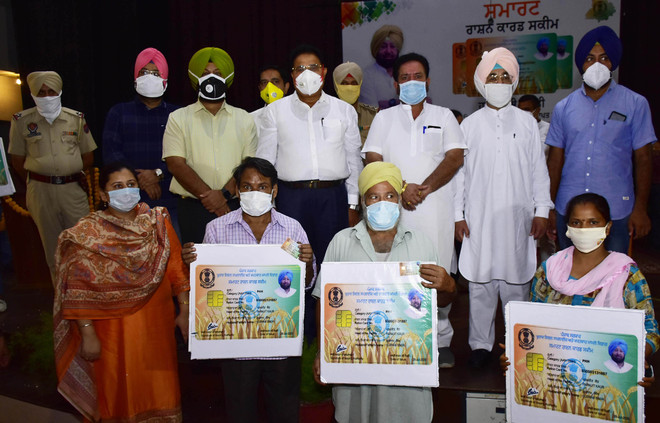 After the launch of Smart Ration Card scheme virtually by Chief Minister Capt Amarinder Singh on Saturday, Amritsar West MLA Raj Kumar Verka distributed cards among eligible beneficiaries. Around 3.20 lakh families in the district and 1.41 crore beneficiaries across the state would be covered under the scheme.

While talking to reporters, Verka said the scheme would help curb corruption and give freedom to the beneficiaries to buy from any depot. “The card holders’ biometrics will be identified by the data stored in the chip in the Smart Ration Card so that no wrongful distribution of ration can take place,” he said.

Amritsar East MLA Inderbir Singh Bularia, who was present at the distribution spot, said the government had fulfilled its promise by launching the card. “The state government is strictly working for the welfare of the people despite the financial constraints created by the Covid-19 pandemic,” he said. The MLA said the government had been carrying out development works uninterruptedly and a major project like implementation of public ration distribution scheme was launched across the state on Saturday.

Social distancing norms were violated during the function. The minister said 1.78 lakh families in the district would be covered under the scheme. Meanwhile, MLA Harminder Singh Gill (Patti), Sukhpal Singh Bhullar (Khemkaran) and Ramanjit Singh Sikki (Khadoor Sahib) distributed cards to the beneficiaries in their respective constituencies. The minister said the scheme would help curb corruption.