Stretch of Problems: Commuters, locals suffer as work on flyover in Amritsar moves at snail's pace : The Tribune India 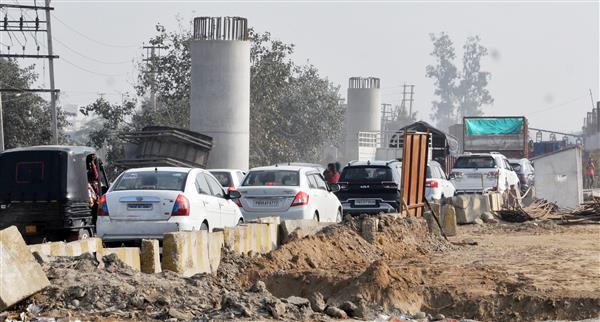 A huge traffic jam on the road due to ongoing construction work of flyover on Monday. Photo: Vishal Kumar

Owing to the ongoing work of construction of a flyover near the sabzi mandi on the bypass road here, commuters are facing a lot of inconvenience. People have been complaining that traffic snarls on the Mehta Road turn (locally known as Khande Wala Chowk) on the road were a frequent phenomenon earlier too but the problem has aggravated with the construction work beginning earlier this year.

Residents said with the completion of the work of flyover, there will be a respite for commuters soon. However, the slow pace of the work is a cause for concern. At the ongoing pace, residents might not get relief from traffic woes in at least a year. Commuters travelling from local areas to the bypass road have to cross the stretch to reach the Golden Gate and travel on the main GT Road for Jalandhar and beyond.

Gurmeet Kaur, a daily commuter, said: “I consider myself lucky on the days when there is no traffic jam on the road, while I am travelling to work and back. Sometimes, people get stuck in jam for hours and face a lot of problems.” She said traffic police should be deployed there during rush hours.

Residents of the area said traffic jams are witnessed even during early morning as vegetable growers and sellers visit the market on their tractor-trailers and pickup vans. “Temporary traffic signals at the Mehta Road turn can also decrease the problem. Traffic snarls are usually caused when people violate traffic norms,” said another traveller, Sukhmeet Singh.