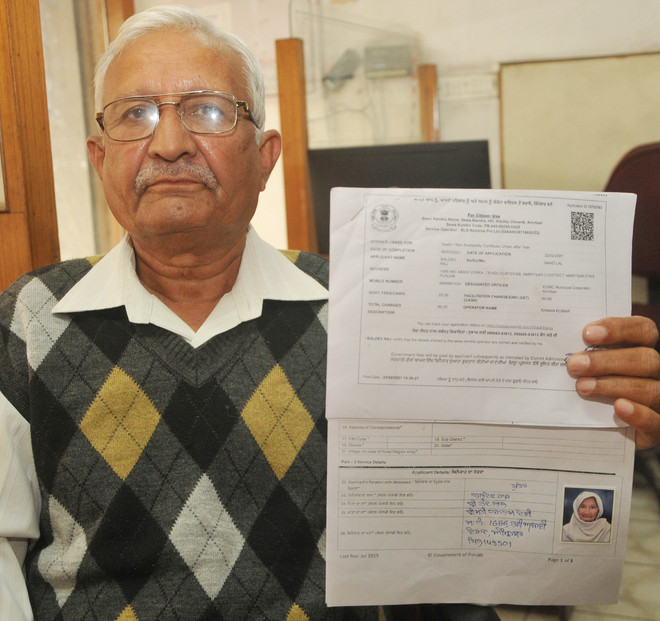 Baldev Raj alleged that employees at the Suvidha Centre do not follow token system and are accepting files coming through ‘agents’.

A 67-year-old retired teacher Baldev Raj visited the Suvidha Centre at the Deputy Commissioner’s office for the fourth time on February 22. Every time he’s been here it has been a long day, waiting till the sundown as the queue snakes, just to submit an application to get the death certificate of his mother. He alleged that employees at the Suvidha Centre do not follow the token system and are accepting files coming through ‘agents’ which leads to heavy inconvenience for a common man It’s not only him. The applicants of various government services have been losing patience over the functioning of this centre. Earlier, he was called to tell the status of first copy of death certificate, which he did not collect from zonal office. Then he was asked to reapply for certificate. “I reached at the Suvidha Centre around 9 am and initiated the process. I got a token and stood in the queue of 6 number windows. I am 67 and recently went under knife due to my knees,” he conveyed his plight. As he hanged in there somehow, requesting time and again to accept his file, some persons were entering in the cabin from backdoor and employee at the window was accommodating them. “I suspect they were agents and must have some connivance with the employees,” he said.

But everyone’s not the same. One of the employees recognised his pain and took the file from him. “I have thanked the person, who was working on other window and got free around 3 pm. Then I decided to tell the senior officials about the goings-on. I met District Manager (DM) and narrated the entire story. He listened deadpan and left the cabin without responding.” Baldev added.

When asked about the case, Sanjay, the District Manager at the centre, said, “A large number of visitors come to meet and I don’t remember the case of Baldev Raj in particular. But there is no such practice at the centre. We take files as per the token number. Every visitor is equal for us, we don’t discriminate with anyone. We are making efforts to reduce the long queues which often pose inconvenience to the visitors.”