Take a dip & calm your soul 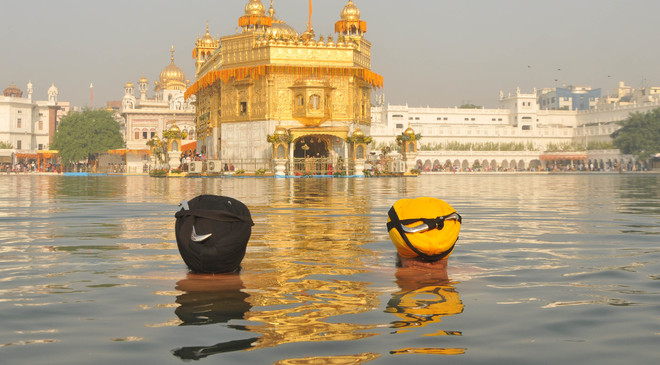 The holiest of the holy sarovars was excavated by Guru Ram Das between 1573 and 1577. Earlier, a large dhab preceded it. A myth is popular among devotees that the king of Patti married his daughter with a leprosy infected person, as she believed that God feeds the ordinary and not the king. She started begging along with her husband. When she reached at Sultanwind village, her husband took a dip in the dhab and was healed. Though historians claimed that the Guru purchased the land and excavated a 500-ft long, 490-ft wide and 17-ft deep sarovar with plans to establish the city. The Golden Temple was then constructed on the sarovar by Guru Arjan Dev, the fifth Sikh Guru. During the late Mughal period, Afghan invader Ahmad Shah Abdali filled it with sand and banned the entry of Sikhs. The warriors of misl reclaimed it soon. The Sikhs believe that it gave them the power to fight and struggle. Maharaja Ranjit Singh renovated it with white marble during his regime.

The city, being more than four-centuries old, has several natural holy pools (sarovars) developed as the centre of devotion, which continue to have an air of significance and reverence among residents for the medieval period. The name of the city is also ‘Amrit-Sar’, which translates into a ‘pool of nectar’. The Amrit sarovar was excavated by Guru Ram Das at the nucleus of the city in the late 16th Century. The city was located on a ‘U-shaped’ basin having a slope of 1-ft per mile. And, at the time of showers, water from all sides would fill up the depression. Almost all natural pools (dhabs), except those having religious importance, were filled till 1914 by the British government following the epidemic. Two talaabs, including Lasmansar in Katra Ramgharia and Nirbaansar, were filled later. Initially, rainwater was the only source to fill these sarovars until Hansli was constructed to facilitate the supply from the Ravi.

The Durgiana sarovar was constructed at the Raghunath Temple on the pattern of the Golden Temple in 1930. It houses a temple in the centre of it. Hindu festivals are celebrated with great zeal and fervour on the complex.

It is the smallest among the five sarovars of the city. It was completed during 1603. Guru Arjan Dev — the fifth Sikh Guru — compiled the Adi Granth by the side of this pool. Once, it was lined with bountiful trees and the surroundings were as soothing as the calm water.

It is known as the first sarovar dug up by the Sikh Gurus. Situated 700 metre away from the Golden Temple, fourth Sikh master Guru Ram Das, initiated the excavation before the Amrit sarovar. As per the myth, during spading of the land, he found a saint named Baba Santokh, who had been meditating beneath for a long time. Waiting for salvation, he breathed his last in the dainty hands of the Guru. The tank was named after the saint. It was the largest sarovar in the city and was completed in 1589. At the time of the British rule, the government ordered to fill it following the epidemic. The Sikh saints Baba Sham Singh and Baba Gurmukh Singh called kar sewa and cleaned it within a record time.

Ram Talai, a small pool near an old temple, is situated on GT Road. It has been mentioned in the Anand Gabha’s book Amritsar: A study in Urban History that the talaab of Kalyan Singh is also known as distillery dhab, as it was close to the distillery during the British period. The distillery was later shifted to Khasa on the Amritsar-Lahore road in 1940. There were several small temples around the talaab.

The supply of river water is being provided to all sarovars since 1886 through it. A special hansli (underground water channel) was constructed from the Upper Bari Doab Canal (UBDC) and linked with the sarovars for year-round supply of water. It has an input point near Taran Wala Pul on the UBDC. A water purifier system has also been put in place here.

The sarovar is located near the Baba Attal tower inside the Golden Temple premises. It was named after Bibi Kaulan, daughter of a Qazi of Lahore. As per Kesar Singh Chibber, author of prominent book Bansavalinama, the Kaulsar sarovar was dug in her memory. The excavation works began in 1624 and were completed in 1627 under the supervision of Baba Budha — first Head Granthi of the Darbar Sahib.

Guru Hargobind, the sixth Sikh master, constructed this sarovar during his stay in the city. He used to train Sikhs in martial arts and weapons around it.