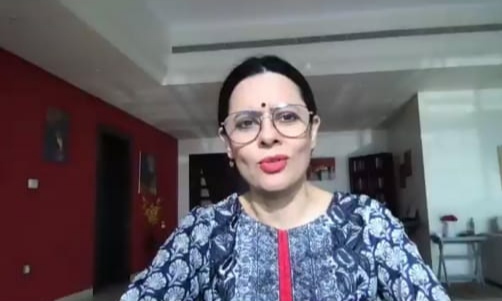 Author and journalist Jyotsna Mohan Bhargava participated in a web session hosted by Majha House on stress management among teenagers. She was in conversation with researcher and human rights activist Enakshi Ganguly and social scientist Monika Banerjiee, as she talked about her book ‘Stoned. Shamed. Depressed’ that deals with stories of teens facing multiple pressures and dealing with mental health issues.

I am shocked by the number of suicides taking place every day and by the public display of suicide on social media. These young children are so attuned to viral popularity that they do not hesitate in uploading videos of their suicide.

While documenting pressures that teens go through today, Jyotsna said unprecedented exposure to internet ad social media at a young age has traumatised children in many ways. ‘I fail to understand why or how parents allow their children to join Twitter or Instagram and other sites when there is an age restriction. We don’t understand how much shaming and trolling these sites can bring which can be a reason for going into depression,’ she said. She said that the pandemic was one of the reasons when she realised that its important to incorporate all that was happening around and to bring it out as soon as possible.

Talking about the increase in suicides among teenagers, Jyotsna said, “I am shocked by the number of suicides taking place every day and by the public display of suicide on social media. These young children are so attuned to viral popularity that they do not hesitate in uploading videos of their suicide.” She also remarked on the hesitation of parents to address personal or intimate issues concerning growing up and sex. She said we have a tendency to brush aside such issues as we feel awkward talking about such things. ‘Even in schools sex education is not taught comprehensively but is limited to a single lecture which children attend and leave giggling, not taking anything from it,’ she lamented.

Jyotsna said in spite of all the bleakness around us there is still hope for both parents and teenagers. “The only solution I can envisage is to initiate a dialogue, an open conversation between parents and children. Children should be encouraged to engage in sports and arts so that they have a vent for their negative energy. The time on gadgets and social media should be monitored strictly and parents should also set an example by also limiting their own time online,” she concluded. — TNS