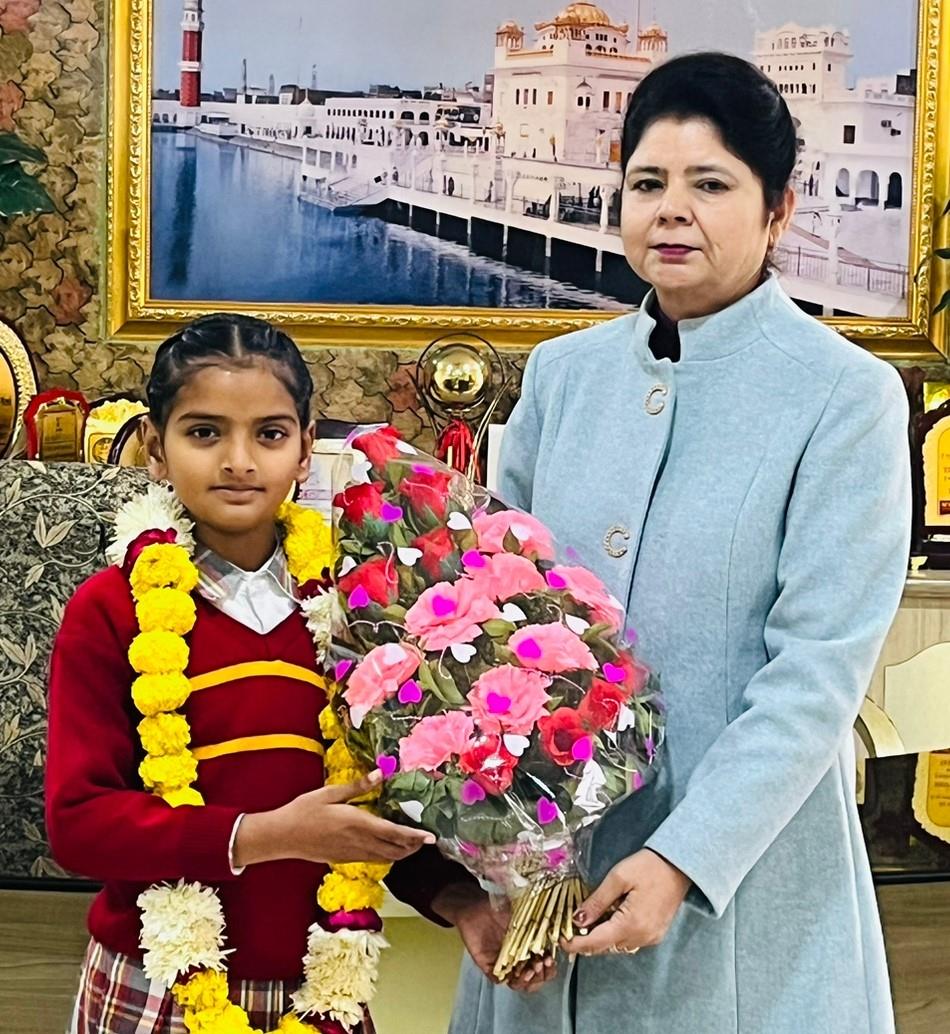 Tanakdeep Kaur, a student of Class V at Mamta Niketan Convent School, Tarn Taran, in her poetic composition on ‘Sapper Prakash Jadhav’ won the prestigious national award. Tanakdeep is among the 25 winners of Project Veergatha 2.0, as claimed by Gurcharan Kaur, principal of the school. The national level competition was organised by the Ministry of Defence in collaboration with the CBSE. The Veergatha 2.0 is proposed to culminate with a prize distribution ceremony. Tanakdeep is the only winner from the state of Punjab. Veergatha Project, a part of the Azadi Ka Amrit Mahotsav, was launched to inspire school students with stories of war heroes and brave-hearts. Under the project, students are motivated to compose poems or paragraphs, write essays, paint or do multimedia presentations (enactment of videos) on gallantry award winners for dissemination of acts of bravery and life stories of the personnel of armed forces. The 25 best projects are rewarded nationally by the ministries. The project was organised between September 13 and December 31, 2022. Principal Gurcharan Kaur called it a proud moment for the school and the state. Tanakdeep would be awarded a cash prize of Rs 10,000 from the Ministry of Defence and Education on Republic Day in Delhi. The efforts of Tanakdeep Kaur has been appreciated by the school management.

The Tarn Taran administration appears to be totally helpless in clearing encroachments from common places in the town, especially from roadsides. The administration launched a drive many a times in the past but the efforts had to be abandoned midway for reasons best known to the officials themselves. The anti-encroachment drives remained confined to paper only. An announcement in this regard was made a month back from the public address system in the name of the Deputy Commissioner, warning persons responsible for encroaching on roadsides, streets and other common places. The administration warned of initiating legal action against the violators but it proved to be useless. In fact, right outside the office complex of the SDM, Tarn Taran, two-wheelers and four-wheelers were seen parked. The irony was all the more obvious because the SDM is not just the authority for maintaining the rule of law but was also holds charge of the administrator of the Municipal Council whose task it is to remove encroachments. A deep pit in front of the SDM office itself has been causing frequent accidents and calls for attention. The SDM himself led the drive to remove encroachments some time back but it was left midway. The problem is not particular to any particular place in Tarn Taran town but prevails everywhere. The residents of Chabal, Bhikhiwind, Khalra, Khemkaran, Valtoha, Harike, Chohla Sahib, Sarhali and Naushehra Pannuan too face similar problems. Naushehra Pannuan is among the worst effected areas where roads and the main bazaar have been encroached right up to the middle.