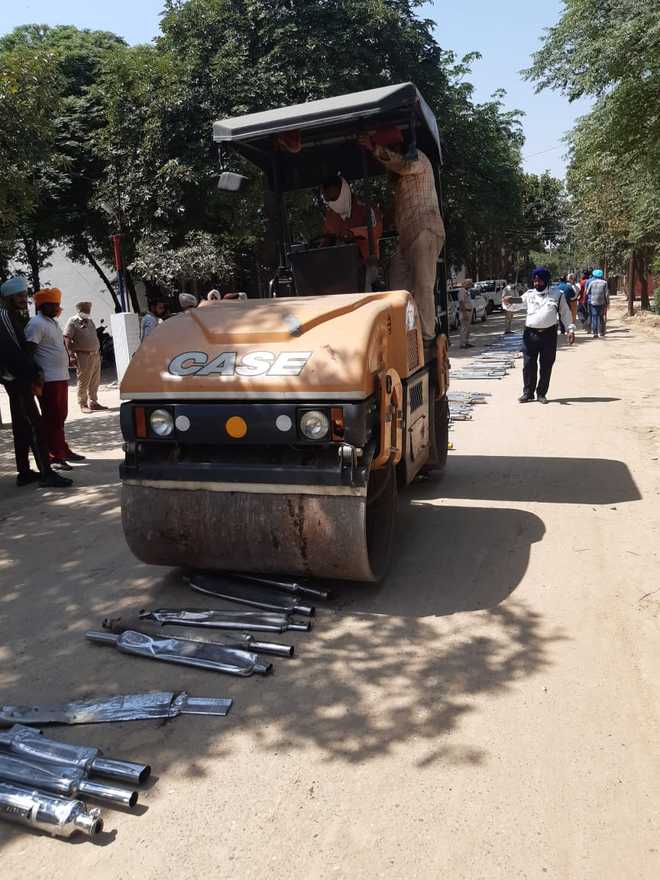 Silencers causing noise pollution being bulldozed by the police.

Residents of the district have a little hope of relief from the noise pollution being caused by vehicles through pressure horn and with the blast-sound created with the silencers installed in the motorcycles particularly with the bullet motorcycles. The problem was not in certain area of the district but each corner has to bear with this menace in the district. No efforts had been made by the authorities till date to tackle this as mostly the erring people were from the higher sections of the society who have no concern with the problem being faced by senior citizens and the women commuters on the roads. The blast sound mostly was just creating to pester females and the school-going girls. The nuisance was being observed the whole day. It is at its peak on the main road in Tarn Taran in the evening, also nearby areas like Patti, Chabal, Bhikhiwind and other urban-like townships have to go through this every day. SSP Dhruman H Nimbale had been receiving complaints in this regard and has issued strict instructions to the concerned officials to launch a move against this menace. Inspector Harjinder Singh, traffic police in-charge, was given the assignment to lead the move. The SSP said that 10-day move was launched and special nakas were installed at certain points in the town and sensitive places. In the first stage, the violators were warned of strict action for the nuisance. The district police challaned 250 vehicles violating the norms with pressure horn and same number of silencers causing blast sound were removed from the motorcycles. The removed silences were made non-functional by bulldozing them at the Police Lines in Tarn Taran. The district police had warned of stricter action against the violators in case they were not ready to mend their ways. Tara Singh Khehra (70), a social worker of Tarn Taran, had appreciated the move and demanded to carry it on in the future to provide fearless and peaceful atmosphere with was required to the senior citizens.

The Nat Mandli (team to play one-act play) formed by the students of Government Senior Secondary School, Vein Poin, itself was delivering a good message to the area parents to enroll their kids at government schools. The team is headed by Arashdeep Singh, a student of the school, in which the other characters too were from the school. The one-act Play (nukad natak) namely ‘Navian Paidan’ was edited by Dr Hardeep Singh, teacher of Punjabi at the school. Parveen Padda, principal, said after its successful performance with good results in Vein Poin village the nearby school authorities had started inviting the team to their villages and it had performed in show in nearby Lalpur, Bharowal and other villages. The principal said that the team was playing the role of ‘brand ambassador’ of the Education Department. The team was delivering its impressive message regarding the facilities being given at the government schools like free education, free books, mid-day meal, scholarships and better infrastructure along with a well-qualified staff.

Great enthusiasm among the youths of Malhian village near Tarn Taran went unnoticed though they had been doing their best to make sports popular in their area for more than four years. Most of the residents are from the poor families particularly from the Dalit community and the marginal farmers’ background. A number of youths about five years back emptied the village pond adjacent to the Tarn Taran-Jandiala Guru road and the wastewater was linked with the sewerage lines passing few meters from the village. The pond spread in more than one and a half acre land and had been converted into playground where as many as 150 youths of the village came to play football, volleyball, cricket and also did various physical activities in the morning and evening hours. There was also a Sri Guru Ram Das Kushti Akhara, where more than 30 budding wrestlers do exercise in the morning; four of them have made it to the national level competitions.