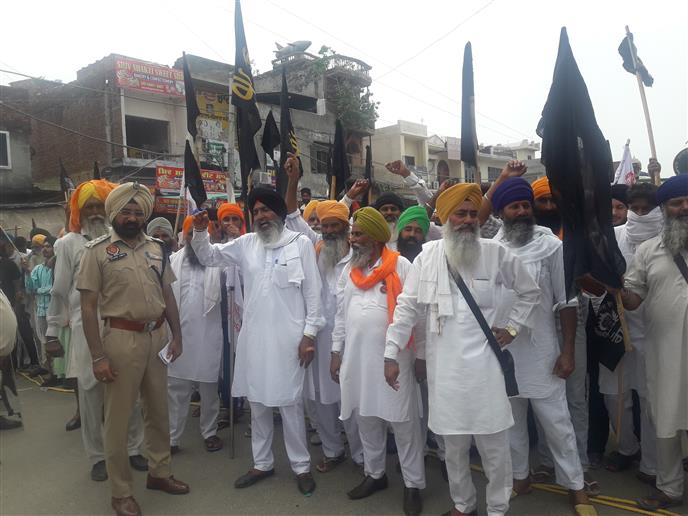 Newly appointed PCC president Navjot Singh Sidhu on Thursday had to change his route in the wake of the farmers’ protest to reach Mehmoodpur village. As a result, Congress workers, who had lined up on roads for hours to welcome him here, had to return disappointed.

Sidhu had to attend a function organised by Khemkaran MLA Sukhpal Singh Bhullar at his native Mehmoodpur village. As per the programme, he was to reach Mehmoodpur via Tarn Taran, Chabal, Sursingh, Bhikhwind, Algon Kothi, Amarkot, etc. However, his cavalcade took a detour through Patti, Valtoha and Amarkot to reach the village to avoid the farmers’ protest in the area. He reached there by about three hours late.

Farmers have already appealed to all political parties not to organise events till farm laws are repealed, but the Congress is celebrating the appointment of the new chief. Sahib Singh, farmer leader

At Mehmoodpur, the new PCC chief remained seated on the stage but did not address the gathering. He was accompanied by Amritsar MLA Raminder Singh Bularia. Bhullar welcomed the elevation of Sidhu.

Meanwhile, farmers under the banner of the Kisan Mazdoor Sangharsh Committee (KMSC) protested at different places. They staged dharna in Bhikhiwind and Sursingh and gathered at Chabal to show Sidhu black flags.

Farmers in Sursingh village, too, remained on the road for more than nine hours to show black flags to Sidhu. — OC