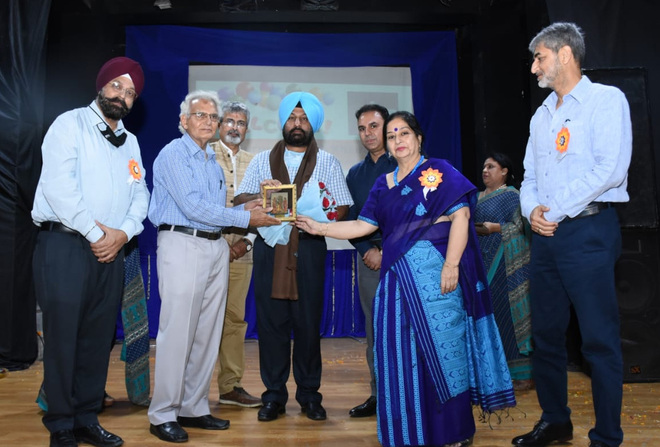 Principals and teachers being honoured during an event.

Amritsar: Sahodaya Schools Complex, Amritsar, and Bhavan’s SL Public School organised ‘Teachers’ Award Ceremony’ on Saturday on the school premises. The chief guest on the occasion was Gurpreet Singh Khaira, Deputy Commissioner and Congress leader Vikas Soni. Seven Principals and 108 teachers from Sahodya Schools were honoured for their contribution in the field of education. As many as 16 teachers from Bhavan’s SL Public School were given special awards for completing their 15 years of service in the institution and giving the best of their efforts to represent the school at different levels. Sukhpreet Kaur, Harpreet Kaur (2020-21) and Alka Sharma (2019-20) were honoured for receiving CBSE best teacher award. They received the cheque for Rs 11,000 each from Sahodaya Schools Complex.

Teachers are the backbone of any civilised society and they need due respect, this was stated by Khalsa College Governing Council honourary secretary Rajinder Mohan Singh Chhina during the award giving ceremony during the state level Best Teachers Award ceremony at Khalsa College of Education (KCE), GT Road, here on Saturday. Citing an example of Japan where the teachers are taken in high esteem, he also asked the teachers to be the role model for their students. Harmeet Singh, lecturer, Political Science from Baba Sohan Singh Government Senior Secondary School, Bhakna Kalan, Amritsar was awarded with Best Teacher Award with cash prize of Rs 1 lakh and citation while Prerna Khanna, Special Educator, Spring Dale Senior Secondary School, Amritsar was awarded with second prize of Rs 25,000 and citation. The third position was bagged by Surinderpal Singh, ETT teacher from Govt. Elementary Smart School, Muradpur, Naryal, Faridkot was awarded with cash prize of Rs 15,000 and a citation.

The NCC Naval Wing of Khalsa College Amritsar on Saturday completed the naval enrolment for the current session in which 100 students were shortlisted. The procedure of the enrolment procedure was conducted by Indian Navy officials with the help of the colleges authorities as the students of first year from various streams of the graduate classes participated in the selection process. Dr Iqbal Singh, Associate Prof, Physics who is Associate NCC Officer (ANO) meanwhile addressed the students of the various departments to persuade them for the keen interest in joining the armed forces. The Indian Navy officials scrutinised the students and also told them about the benefits of the NCC for themselves as well as for the society. TNS

Tarn Taran: Subhneet Singh, a student of Sri Guru Harkrishan Public School, who bagged the second position in a state-level religious competition was honoured by the managing committee here on Saturday. Ranjit Bhatia, school principal, said the competition was organised on the occasion of Gurta Gaddi Divas of Sri Guru Arjan Dev at Gurdwara Sri Har Sar Sahib, Mugal Chak Pannuan (Patti). The principal said two students Sehajpal Singh and Subhneet Singh participated in the competition. Kirtan Darbar and turban-tying competition was held on the occasion. Shubhneet Singh was awarded a cash prize of Rs1,100 and a certificate. OC