A majority of vendors belong to the below poverty line (BPL) category in Jalandhar and aren’t even covered under any residential scheme. Tribune correspondent Aparna Banerji and lensman Sarbjit Singh document the plight of such men and women who spend their scorching summer afternoons in the open to make a living for themselves 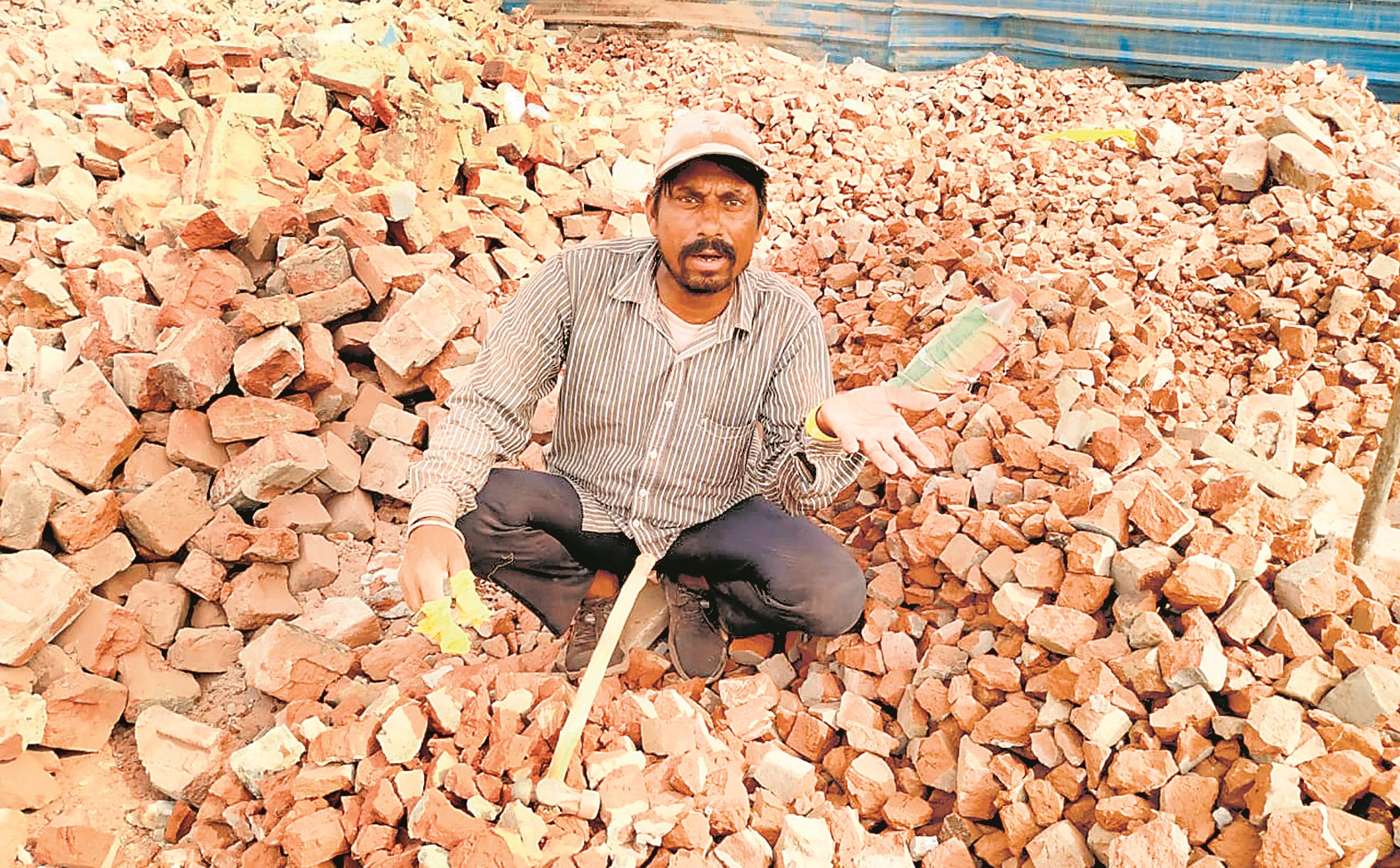 The silent sufferer Babu Lal (40) sits amid the spread of broken bricks which he has been breaking since morning way into the late afternoon at Rori Adda on the 120 feet road in Jalandhar.

On a hot afternoon, as AC cars whoosh past the wasteland that goes by the name of 120 feet road in Jalandhar, Babu Lal sits for hours under the scorching sun, looking like a tiny dot amid a mountain of rubble, breaking rori (bricks).

It’s 43°C already and this stretch called Rori Adda seems to be on fire. But Babu Lal has Rs 500, his ‘dihari’ (daily wage) to earn. He sits possessed, fingers wrapped with dirty cloth, decimating brick after brick. The site is marked by many other men sitting on similar piles. Further up the road, a woman sits at the threshold of her ‘vehra’ to escape the heat of her windowless room, which heats up like a furnace in the hot afternoons. Her room has no fan. In the sultry afternoon, the stuffy weather outside gives her more comfort.

“Andar hawa nahi hai, yahan phir bhi thori hai. Pankha hai nahi. Kya karenge, bahar baithe hain,” she says. Her husband, a construction labourer, is off to work, kids to school. Her room has an old TV. There are no chairs, tables or windows.

Even as the well-heeled spend scorching afternoons in the comfort of their ACs, the hot, window-less vehra rooms, dusty streets and stinking sewage drain banks are populated with scores of poor who can’t even afford a little fan to keep them cool in this unusually hot summer. Nor can they afford lemons to make themselves some lemonade to beat the heat.

Vendors work throughout the day in the sun as their better halves hang their kids to sleep in makeshift hammocks made of sarees or tattered bed-sheets.

There are 8,000 to 10,000 vendors in Jalandhar, a majority of whom belong to the below poverty line (BPL) category.

Sunita (35), another woman from a marginal family, sits selling her ‘merchandise’ on the stinking pavement as a dog yawns by her side. Helmet-seller Anwar Ali (70), too, sits on a discarded plastic chair waiting for customers on Nakodar Road. Shakuntala (70), whose son died a year ago, sits by the hellish Bist Doab, selling clothes as she gets no pension. They’re all connected by sweat and by the hot sun that burns their tired, blackened, hardened flesh. Every afternoon, thousands take to streets and sidewalks, selling their wares, their skins tanned to a darker hue with each afternoon shift.

Whatever their condition, all of them seem content. Babu Lal has a precious advice, “Who all died during Corona? A majority of them were rich people. They all died because of sitting in ACs all day long. The heat keeps our blood pumping, our vitality alive. The AC people will live longer, if only they step out.”

While 12,000 vendors were formally registered in Jalandhar as per a survey conducted in 2016 by the Barashah Company, of these many returned to their native villages, when the pandemic struck. Some have returned, while new vendors from Punjab have joined the vendor community.

Mandeep Singh, Superintendent, Tehbazari, Municipal Corporation, Jalandhar, however, said: “A majority of the vendors are migrants and from BPL families. We don’t think any of them have been covered under the housing schemes as they don’t apply. In the pandemic, 1.5 lakh migrants returned. The pandemic also cost many poor shopkeepers their shops/ vends as they couldn’t pay their rent. Many also shifted to the pavement. So, in all about 8,000 to 10,000 remain, which include both new vendors, some those who have returned and those driven poor due to Covid.”

Even as the well-heeled spend scorching afternoons in the comfort of their ACs, the hot, window-less vehra rooms, dusty streets and stinking sewage drain banks are populated with scores of poor who can't even afford a little fan to keep them cool in this unusually hot summer.