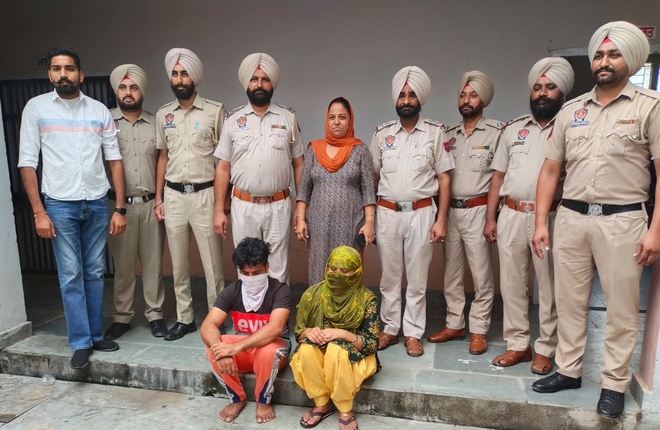 The woman, nabbed by the Amritsar rural police for killing her husband, along with her paramour, in Amritsar, on Thursday.

The Mehta police arrested a woman with her paramour for allegedly killing her husband who used to object to their relationship.

The family of the deceased, identified as Guljit Singh (35), got suspicious after they found strangulation marks on his neck, while going through his pictures. Those arrested include Baljit Kaur, wife of Guljit, and her paramour Inderjit Singh of Rasulpur Kalan.

Raj Kaur, mother of the deceased, said Guljit along with his wife and two children used to live separately. He used to run a grocery shop, besides selling wood. She said on September 20, when she went to his house, she found him lying unconscious on his bed. She raised an alarm and her younger son Sajjan Singh and Baljit also came. They tried to wake him up, but he was dead.

The next day Sajjan got the body videographed and clicked pictures before cremating Guljit. Raj said on Wednesday, when they were going through pictures, they spotted strangulation marks around his neck. She said Inderjit and Baljit had illicit relations and Guljit used to object to this. Enraged over this, the duo allegedly killed him, said Raj.

During preliminary probe when the police analysed the CCTV cameras, they found that Inderjit was there in the house.