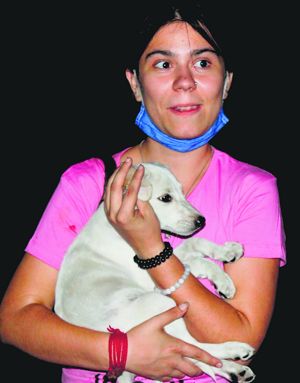 Even though she is in the country on a student visa, her love of dogs forced her to legally adopt a stray dog as a pet. Francesca Filip, aka Franny, a student of social sciences, is at present keeping the animal with her at faculty hostel of the university.

A Romanian national, Franny has named the pet, Ollie. Franny said she had spotted an injured dog on the street a few days ago. As she wanted to provide the animal medical help, she started searching for local organisations working for such animals.

Franny said finally she found help from People for Animals (PFA) shelter home in the Rani Ka Bagh area. At the shelter home she fell in love with a cute puppy, which the PFA team had taken under its care. She said she would take Ollie with her to Romania after completing her study.

Franny said, “Ifeel very bad when Isee the plight of stray animals in the holy city, especially when these animals are injured or sick.”

People for Animal president Nidhi Adlakha said, “The dog Franny has adopted is an Indian breed. Mostly people adopt cross-breeds or exotic breeds. We all have to learn a lesson from Franny who despite being a foreigner has adopted a desi dog,” she said.

Adlakha said most of the dogs seen abandoned on the streets were of Indian breeds. “Contrary to foreign breeds, the desi breeds have more tolerance for local weather conditions and thus have a better chance of survival,” she said. In a message to dog lovers, Franny said, “We should not buy pets. Instead we should adopt them. After all, we cannot buy love.”