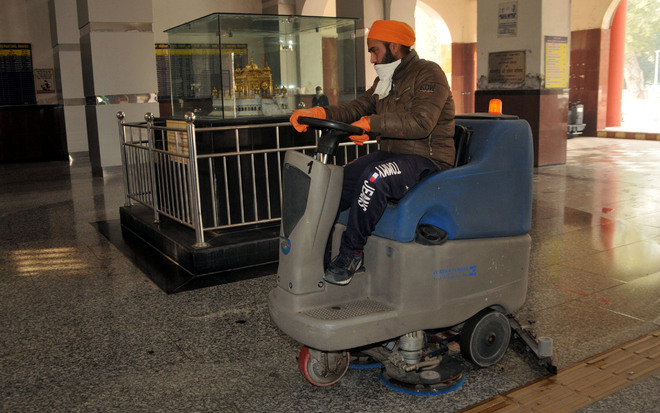 An employee cleans up the railway station. Photo Vishal Kumar

Though the Indian Railways is set to resume train services on Tuesday, uncertainty still prevails as the Kisan Mazdoor Sanghrash Committee (KMSC) categorically refused to allow movement of passenger trains.

Adequate security arrangements had been made at railway station and all platforms were cleaned by mechanical sweeper. Scanners were installed at the entry and exit points of the railway station.

The Government Railway Police personnel said they had received schedule of trains which would ply from Amritsar. Officials said three trains, including Amritsar-Jainagar Express (11.55 am), Amritsar-Delhi Shatabadi (04.50 am) and Golden Temple or Frontier Mail (09.25 am) would leave in the morning.

The trains which are scheduled to arrive today include Jainagar-Amritsar (23.55 pm), Nanded to Amritsar (8.55 pm) and Pashchim Express (7.20 pm). Golden Temple Express from Mumbai and Anandpur Sahib would arrive at 5.30 am and 01.45 pm.

An official on condition of anonymity said they had made all the arrangements to resume services. He said all the railway tracks had been inspected as trains remained suspended for the last couple of months. Meanwhile, farmers were against moment of passenger trains. They held a meeting with Inspector General of Border Range SPS Parmar, who informed the farmer union that a meeting between them and Chief Minister Capt Amarinder Singh has been fixed for November 25.

Farmer leaders, including Sarwan Singh Pandher said they would not relent until the Centre revokes controversial farm laws. He said they would meet Capt Amarinder Singh. “We are ready to allow movement of goods trains, but the Centre is trying to dictate terms,” said Pandher.

The farming community had blocked rail traffic from the last two months.

Activists of the KMSC had been sitting on rail tracks near Jandiala. While all other farmers’ organisations had given their consent for allowing resumption of services after a meeting with the Chief Minister, the KMSC had been adamant on not allowing passenger trains. The farmers’ organisations would be holding a protest in New Delhi on November 26.

Officials said three trains — Amritsar-Jainagar Express (11.55 am), Amritsar-Delhi Shatabadi (04.50 am) and Frontier Mail (09.25 am) will begin their journey before noon