Principal of Hindu College, Sanjeev Sharma, talks about institute’s progression over the years 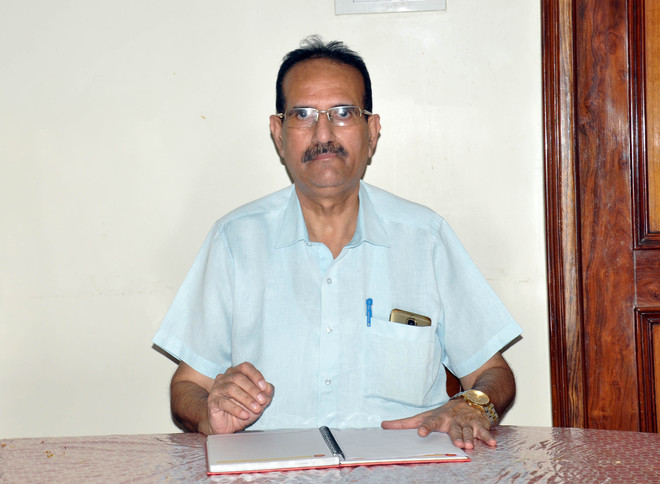 AS one of the oldest educational institutions in the city, Hindu College has an illustrious history and alumni to boast of. Established in 1924 by Hindu Sabha, a philanthropic body led by eminent leader Sir Gopal Dass Bhandari, the institution was initially run as a school. The college has a long list of eminent alumni, including former Prime Minister Manmohan Singh, Field Marshal Sam Manekshaw, cricketers Bishan Singh Bedi, Madan Lal and the recent ones like star comedy artiste Kapil Sharma. In an interview with Neha Saini, Its current principal Sanjeev Sharma, who has been an educator for the past three decades, talks about the college’s progression over the years, the sudden shift it had to make towards digital teaching and the pressure of conducting exams for exit classes amid the pandemic. Excerpts:

Guru Nanak Dev University (GNDU) has announced the schedule for exams of exit classes. How prepared are you to conduct the exams according to the schedule?

We are going to follow the schedule and rules finalised by GNDU. With such a short time given for preparations, it will be a challenge, especially to reach out to private students. We have 150 private candidates pursuing various courses from our college and so far, only five of them have reached out to us with details for examination. Ideally, the university should have allowed private students to sit for the exam at university premises, as limited number of students would have made it possible to ensure health safety. But now we have to wait and see how the first exam goes.

The college was established as an alternate seat of academics and it has set very high standards in education. But over the years, we have seen a downfall, the reasons of which cannot be pinpointed. But it's directly related to the overall downfall in the standards of higher education in the country.

With the sudden shift towards online mode of functioning being witnessed after virus outbreak, how has Hindu College fared so far with digital platforms?

As far as teaching is concerned, we have set up virtual classrooms and prepared our faculty through workshops on online classes. But the admission process has been hit due to the pandemic. I feel that the transition towards digital education has not been smooth and there are huge gaps needed to be filled. We get several students from the rural belt who are still not aware of the changes in education. Also, the admission process has been slow as not many students are finding hard to arrange fee and means to access digital classes.

What steps have to be taken to facilitate students as well as faculty for the digital transition?

We are offering fee waivers and delayed fee options for students finding it hard to arrange funds. Nobody could have predicted such a drastic shift in education sector in India and so, everyone in the education sector was unprepared for it initially. With time, we have trained our faculty and regular online classes are being conducted for the new session. We are also investing in building infrastructure and plan to continue with digital transition even after the things normalise. But one challenge remains. It is of making online mode of teaching a two-way communication just like conventional classroom teaching.

Hindu College has been part of the city’s history since its establishment. It was an important seat of academics as well as sports. How has its progression been over the years?

Indeed, Hindu College has given many celebrated names to the country in the field of politics, sports and science. The college was established as an alternate seat of academics and it has set very high standards in education. But over the years, we have seen a downfall, the reasons of which cannot be pinpointed. But it’s directly related to the overall downfall in the standards of higher education in the country. With the technological advancements in the field of education and focus towards practice-based learning, the onus is now on getting a job after a degree, rather than seeing education as tool of individual development. The student culture and even teaching standards have fundamentally changed. Education has become a commodity and this perspective or treatment needs to change.

What, in your opinion, can be done to make required changes?

I feel that the National Education Policy can be a trigger for the change. The old one had become outdated and this change in definition was long overdue. We need to create a climate of learning for students that grooms their mind and personality while sharpening their skills for employment.