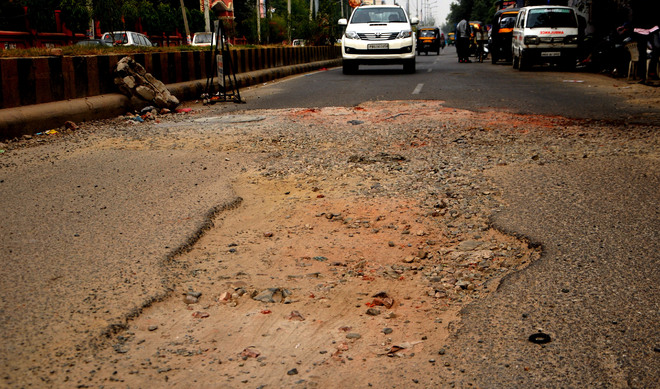 The pockmarked stretch is used by residents to visit Majitha and nearby villages. Tribune photo

The pits which had been dug up for sewerage works on the Majitha road have spelled trouble for commuters. Many of them complain that they are always on tenterhooks while travelling through the stretch. The road is of strategic importance as residents of numerous residential colonies take it to visit Majitha and nearby villages. It is also the route to Guru Nanak Dev Hospital and Employees State Insurance (ESI) Hospital.

Shopkeepers operating their business along the road stated that the pits were dug months ago for sewerage repair. Instead of being filled properly, these pits were used to dispose of waste and garbage, said a shopkeeper. He added that as the area under the pits is higher than the surrounding road, it has been rendered non-motorable.

The stretch of the road was earlier dug up for laying CNG gas pipes. The commuters stated that driving on the road has become a problem for the past few months as the traffic moves at snail’s pace.

The pockmarked stretch further poses inconvenience to commuters. “The drivers have to suddenly apply brakes on reaching near the potholes. Sometimes, two-wheelers skid due to pebbles scattered near the potholes,” complained another shopkeeper Sukhwant Singh.

As the two big hospitals — GNDH and ESI fall on this stretch, the movement of ambulances is frequent here. The potholed road also affects patients visiting the hospital. Area residents demanded illegal encroachments along the road be removed so as to ease the flow of traffic. “The road near GNDH is heavily encroached upon. When the schools were open, it used to be a nightmare to drive through this road as it used to be jam-packed with school buses,” said another resident, Kewal Singh, adding that the removal of encroachments could help in curtailing the traffic jams.