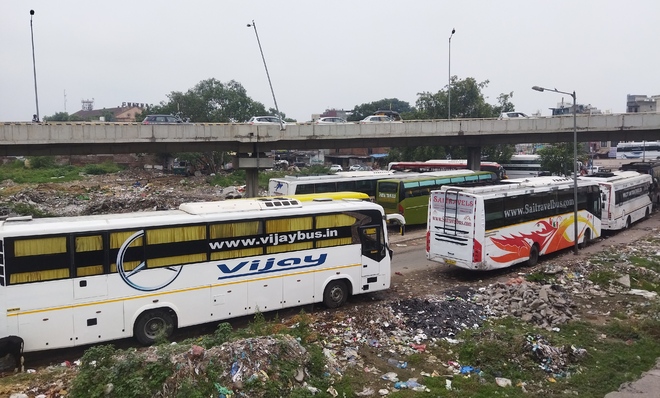 Buses parked outside the Hall Gate in Amritsar on Wednesday. Photo: Sunil Kumar

In addition to the government established ISBT, three more unofficial ‘bus stands’ have sprung up in different parts of the city.

Air-conditioned, video coach and ordinary buses by private transporters remain parked in these bus stands where passengers are seen boarding and de-boarding. These unofficial bus stands are situated at the old vegetable market outside the Hall Gate, on the Railway link road (outside the Railway station) and on the roads outside the Guru Nanak auditorium.

Several buses remain parked on these roads and open spaces. Most of these buses are owned by influential private transporters.

By not parking their passenger transport units in the Shaheed Madan Lal Dhingra Inter-state Bus Terminal (ISBT) they deny the government its dues. The ISBT charges Rs 94 per AC coach for an entry and exit and Rs 50 from a mini bus. While extra money is charged for the night parking.

A number of private buses are being parked on the prime land of old Sabji Mandi belonging to the PMIDC. As per the norms, the Municipal Corporation cannot levy any fee so these remain parked over there for a relatively long time during day and night.

Most of these buses ply to destinations such as Chandigarh, Delhi and Jammu. Sources in the state run transport Punjab Roadways say that these private transporters deny government buses equal business opportunities. For instance, passengers do not come to the ISBT, they can charge any amount of tariff while the state-run buses have fixed tariffs.

Besides, the boarding and de-boarding of passengers on the roadside causes huge congestion on the road, thus causing huge traffic bottleneck. The roads become messy when the passengers alight and board buses. While autos and rickshaw pullers further accentuate the problem as they compete among themselves to get the passengers.

Rajinder Kumar, in charge at the ISBT, said there were about 100 such buses, which had been parked outside the ISBT for the past many years. He accepted that they do send a departmental report to their head office to bring it to their notice.

Jyoti Bala, Regional Transport Authority (RTA), said, she would write to the traffic police to remove buses from the roadsides and they must be parked inside the ISBT. She said a meeting with General Manager Punjab Roadways and ADCP Traffic will be called over the matter.

Jaswant Kaur, ADCP Traffic, said these buses had been parked at these places for the past many years. Even before she joined here. If concerted efforts are made to remove these, then the traffic police would also contribute its bit. She said already she made it a point that no bus resorts to pick up and drop off passengers on the main roads outside the Hall Gate.