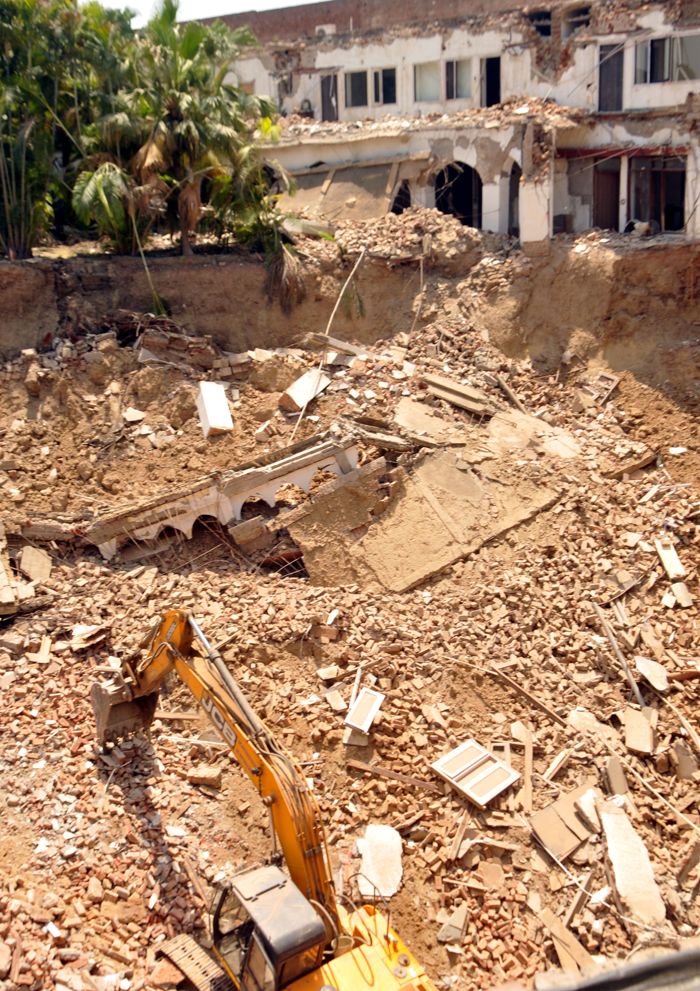 The Municipal Corporation (MC) started removing the debris from the basement of the under-construction hotel here on Wednesday.

However, the process of dismantling the dilapidated portion of Grand Hotel was yet to start.

In a recent meeting, in which area MLA Kunwar Vijay Partap Singh was the mediator, the proprietor of the upcoming hotel agreed to pay the affected residents for their temporary stay. Those affected have been shifted to the rented accommodation after the Municipal Corporation asked them to vacate the house.

However, residents are waiting for a written agreement, having legal validation, from the authorities and proprietor of the under-construction hotel before handing over the houses to the MC and builder.

According to the information, the proprietor of the under-construction hotel also agreed to reconstruct five houses, which were majorly damaged and repair of four houses having minor damages.

Meanwhile, the authorities have arranged engineers to check the other probable risks to houses before its reconstruction.

Simran Singh, one of the affected residents, said: “We have requested the MLA for help. The builder of the adjoining hotel assured to reconstruct five houses and repair the other four. He also agreed to pay Rs 10,000 per month as rent for each accommodation. We asked them to get a written agreement signed from the proprietor of the under-construction hotel and district and MC authorities should also be party in it. They have to assure the safety, strength and time-bound construction of our houses.” Residents claimed that they haven’t received anything in written till date.

“We can’t handover our houses to the MC on verbal assurance of builder and politicians. The officials in the administration should sign the written agreement about the condition of our houses. We have shifted to a rented accommodation, but no one has asked us about the bank account number to pay the rent. We were residing in double-story houses with four bedrooms. They assured Rs 10,000 for rent, which is for one BHK. We are suffering due to the negligence of the authorities and their responsibility should be fixed,” another resident said.