Rising fatalities a cause for concern; cases surface in new areas 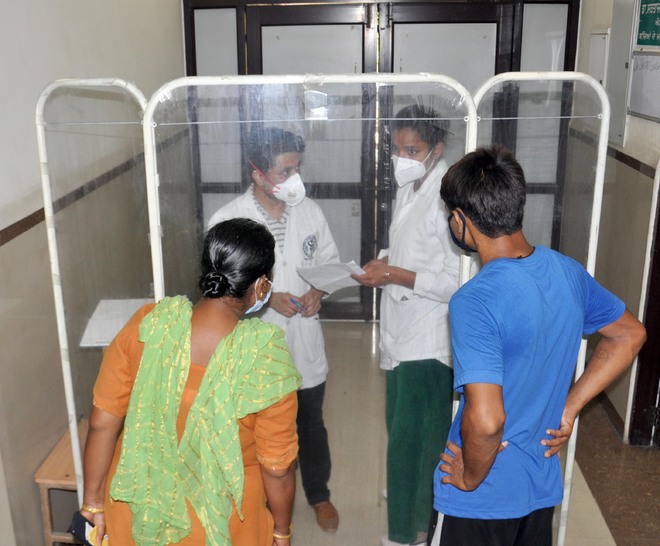 Employees of the Health Department attend a visitor from behind a curtain at the Civil Hospital in Amritsar. Photo: Sunil Kumar

The district reported the death of a 25-year-old man due to Covid-19 on Saturday. With this death, the casualty count has increased to 47 in the district. The deceased has been identified as Karan Kumar, a resident of Bhagat Singh Colony. He was admitted to Government Medical College.

Besides, 14 new cases surfaced, taking the count of positive cases to 996 in the district. Of the new cases, eight are ILI (influenza-like illness) cases while six are contacts of positive patients. One ILI case each was reported from Bharariwal, B-block (Ranjit Avenue), Bhagat Singh Colony, Raja Sansi, Majitha Road, Indira Colony, Preet Nagar and Kabir Park.

Of the contact cases, three were reported from Anand Avenue, besides one each from Shahid Udham Singh Colony, Ganda Singh Colony and Kabir Park.

The district health authorities stated that 807 patients had been discharged after complete recovery. At present, the district had 142 active cases, out of which 92 were admitted in hospitals and 50 were in home isolation.

Though the spread of the virus (as indicated from a reduction in the number of cases reported daily) has slowed down, the rising number of deaths has become a cause for concern.

A health official said positive cases had been reported from many new localities in the past few days. “With this, the chances of the spread of the infection in areas outside the containment and micro-containment zones cannot be ruled out,” he added.