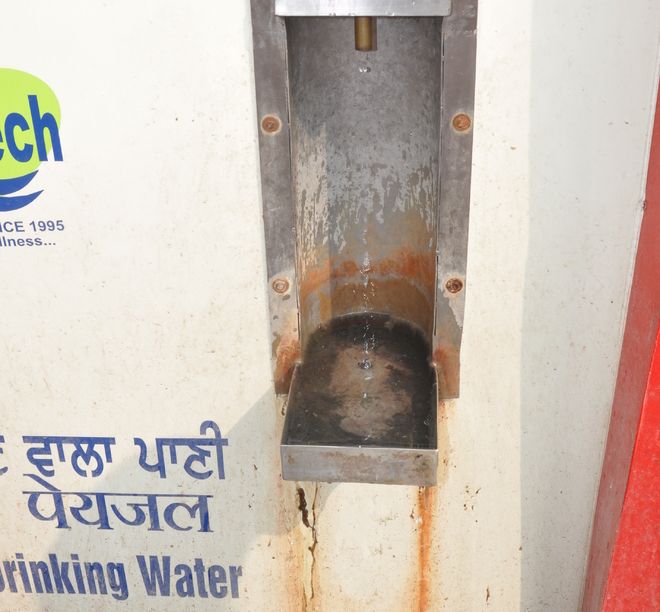 A water dispenser in a poor condition on the Heritage Street.

As machines and its surrounding areas were not being cleaned properly, visitors avoid consuming water from these. Drinking water without a glass is quite inconvenient. Those who try to drink water directly, often waste it.

During a visit, it was observed that most taps were non-functional and some machines were lying defunct.

This project of the MC was highly appreciated as it fulfilled the requirement of devotees heading towards the Golden Temple.

Mahesh, a vendor, who stands near one of the water ATM, said, “No doubt, it is a good initiative of the government, but these machines need proper care. They should be cleaned properly. Awareness should be created among visitors regarding their usage. Some people press the button and waste water. Water is precious and it should be used judiciously.”

The MC had installed 10 water ATMs near the Golden Temple last year. Civic body had spent around Rs 1.35 crore on these machines to provide potable water to devotees.

The MC officials claimed that a company has been hired for maintenance of the machines.

Earlier, the Shiromani Gurdwara Parbandhak Committee (SGPC) had made arrangements to provide water at Saragarhi Chowk and Bhai Gurdas Hall. A devotee had also set up a permanent ‘chabeel’ near the Town Hall.